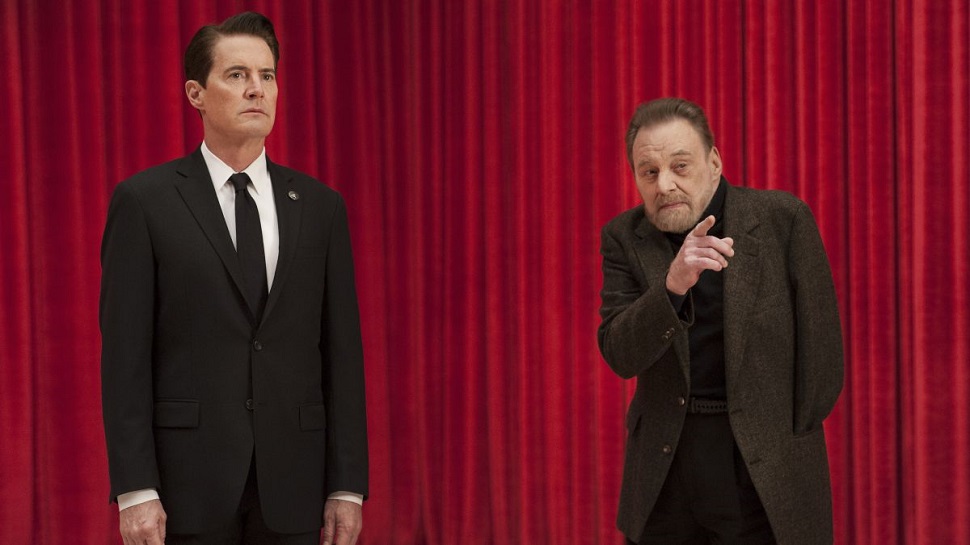 When it was announced that we were getting a brand new season of Twin Peaks from David Lynch after 25 years I figured it was about time I watched the original series as I was too young to really appreciate it when it first came out. My brother Greg was obsessed with it back in the day and after binge watching it over a matter of a few weeks I can now totally understand why.

In case you didn’t know, Twin Peaks revolves around the murder of a young girl named Laura Palmer (Sheryl Lee) who isn’t as innocent as we first think. Everyone in this small town is a suspect and it’s up to FBI Agent Dale Cooper (Kyle MacLachlan) to solve the case.

First of all I totally fell in love with the characters; Dale Cooper is one of the all-time greatest on screen heroes in TV history and he has a heart of gold. You feel better about the world as he spouts little bits of wisdom like “give yourself a present every day” which are words to live by if you ask me. He also likes his coffee “black as midnight on a moonless night” and appreciates the little things in life like cherry pie.

He has an almost naively positive outlook on the world but as the story progresses we discover that he (like everyone else in the town) has his own past secrets. Coop spends a lot of his time talking to Diane on his tape recorder, who we never actually see but she is apparently his assistant and his messages are usually hilarious. Classic quote: “Diane, I’m Holding In My Hand A Small Box Of Chocolate Bunnies.”

Sheriff Truman is another true hero in this tale but even the good guys have secrets in this little town; he’s been having a love affair with the mysterious Josie Packard (Joan Chen) who has even more secrets. Notice a pattern here? Nothing and nobody in Twin Peaks are really what they seem on the surface (especially the owls); everyone is fighting their own demons.

What I love about the show is how so many of the characters are just horrible people which makes them feel more believable. Bobby Briggs (Dana Ashbrook) is particularly hateful and yet at times he shows humanity turning your expectations on their head. A scene between Bobby and his father has Maj. Garland Briggs (Don S. Davis) tell his son about a dream he had and how he only wants what’s best for him. By the end of the scene you’re expecting Bobby to say something snarky but instead he is sobbing and visibly moved by what his father said and how much he loves him.

One of the most despicable characters has to be Catherine Martell played by the legendary Piper Laurie; she is a conniving old witch who is only out for herself and will use anyone as long as it is to her advantage and yet her husband seemingly still adores her.

The one character I simply can’t stand though is Nadine; in the inferior second season the nonsense about her losing her memory and going back to school was so dumb that the show nearly lost me entirely. The character is just annoying right from the start and I’m not sure what they were thinking with that ridiculous storyline. Her relationship with her husband Ed (Everett McGill) is bizarre at best and it’s no wonder he is also having an affair with local restaurant owner Norma Jennings (Peggy Lipton).

[quote]”THE OWLS ARE NOT WHAT THEY SEEM”

There are some lovely ladies inhabiting the town of Twin Peaks from Shelly Johnson (Mädchen Amick) and Audrey Horne (Sherilyn Fenn) to Donna Hayward (Lara Flynn Boyle) all of which are memorable characters who have their own journeys to go through. Shelly’s abusive husband Leo was a real scumbag but by the end of season 2 once he has been taken by Windom Earle (Kenneth Welsh) I gotta say that I almost felt sorry for him and he proved himself a bit of a hero by saving the Major after he had been kidnapped.

Leland Palmer is played to heartbreaking perfection by Ray Wise as he is torn apart by the death of his little girl; as the series goes on however, his behaviour becomes increasingly erratic and we wonder just what his deal could be…

Donna Hayward is arguably the “hero” of the show as a lot of the stories’ events revolve around her because she was Laura’s best friend. Her arc was frustrating though as it is never fully resolved leaving it open and disappointing.

Sherilyn Fenn’s Audrey Horne very much channels Marilyn Monroe and continues to surprise throughout the show as during the first few episodes she appears to be nothing more than a manipulator who always has to get things her own way. She becomes one of the key figures of the story however, and is every bit the daughter of local corrupt tycoon Ben Horne.

Season 1 is all about who killed Laura Palmer and by Episode 15 we have a pretty good idea of who did it and frankly it didn’t come as much of a surprise. The main problem is though once we find out the show struggles to keep the narrative interesting with a bunch of stupid side stories like Nadine’s memory loss, Lucy, Andy and Dick Tremayne’s love triangle and James’ running away from town and shacking up with a woman he meets in a bar who (again) isn’t what she seems.

I did enjoy Kenneth Welsh as Windom Earle though as he is essentially The Joker and it got me thinking that I would love to see David Lynch direct a Batman story; he could bring some real weirdness to it which is always a good thing. Earle is particularly nuts but it’s a shame his fate is so… well… I don’t know. Maybe that will be explained in the new season.

The final episode is one of the most bizarre things I’ve ever seen on television but it was awesome when Cooper goes into The Black Lodge and meets Laura Palmer who says “I’ll see you again in 25 years”. Well, this is around 26 years later but I don’t think I’ve ever seen that before where something has been planned so far in advance in a TV series.

No article on Twin Peaks would be complete without mentioning the stunning music from Angelo Badalementi which is sexy, slinky jazz music but yet haunting at the same time. The main theme is one of the best theme tunes on television and there are some ethereal and mysterious sounding songs like Into the Night by Julee Cruise which all add to the crazed, psycho-sexual tale.

It’s no wonder Twin Peaks became such a phenomenon as it’s unlike anything that came before it; it’s part police procedural, part soap opera, part surrealist character drama and for the most part it works. The second season is as weak as everyone said it was at the time but it’s not without merit and has a few memorable moments.

FIRE WALK WITH ME

At the time of release Twin Peaks: Fire Walk With Me was widely derided and considered a bit of a failure but after watching it recently I’d say it’s due a reappraisal. It is one of the weirdest films you’ll ever see but it tells the story of the final days of Laura Palmer and we get to see just how much of a screw-up she really was.

We reunite with the majority of the characters although it was disappointing that Lara Flynn Boyle didn’t return as Donna Hayward and was replaced by Moira Kelly which was quite distracting.

There are some new characters introduced like FBI Agent Chet Desmond (Chris Isaak) and his partner Sam Stanley (Kiefer Sutherland) who are investigating the murder of waitress Teresa Banks in the small town of Deer Meadow. When Desmond finds a mysterious clue to the murder, he inexplicably disappears and we never hear from him again.

You can tell that David Lynch loves Americana but enjoys exploring the darker side of human nature where there are always secrets buried beneath the surface.

If you thought the show was crazy then you ain’t seen nothing yet as there are scenes which seem to go on forever with some noisy music which makes it quite the endurance test especially a scene with Laura and Donna at One Eyed Jack’s. I think your patience will be rewarded though as I haven’t been able to stop thinking about it since watching it a few weeks back.

There’s a recurring character in the series and the movie called The Log Lady and at first you’re thinking “What the hell is her deal?” but after watching this movie I got the feeling that she was a guardian angel, especially the scene where she confronts Laura outside the local road house and places her hands on her filling her with what can only be described as light.

The show and the movie can be taken in several ways whether you are religious or not so there are certain scenes and characters which are open for interpretation; for me, this is what makes Twin Peaks so special.

Overall, Twin Peaks is bizarre, shocking and charming but never dull with memorable characters, iconic dialogue and one of the most engaging whodunnit’s in the history of television. If you like your shows with a hint of weird then you should pay this small town a visit. I hear they have damn fine coffee and cherry pie. Stay tuned for the third season which will air on Showtime and Crave on May 21st.