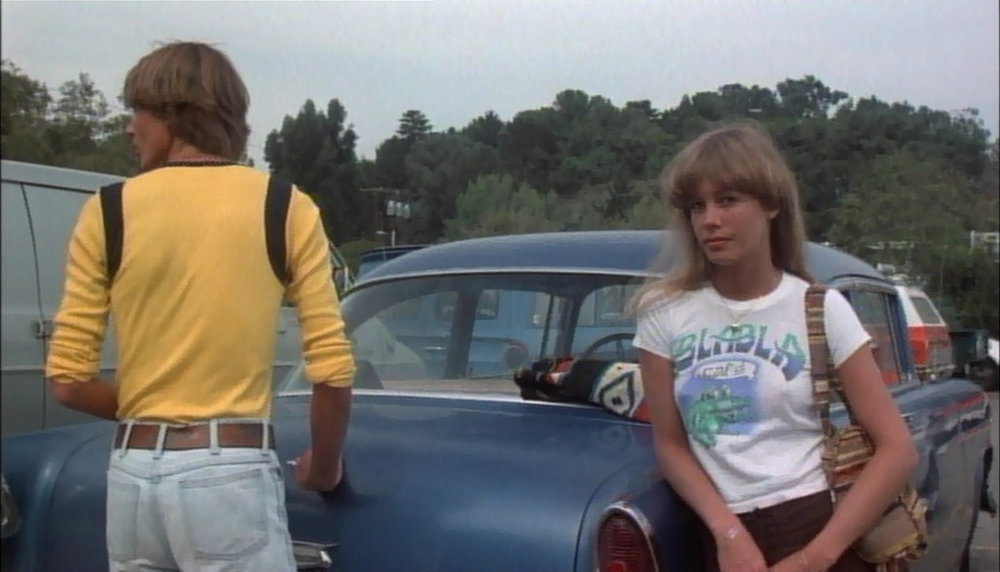 It’s depressing as hell, let me tell you, and so if you’re in the market to watch something that is completely unlike most of the young adult coming of age tales you’re used to watching, then here’s the movie for you.

Plot: When a high school senior is dumped by her boyfriend, her grades fall drastically…to avoid failing, she begins seducing her male teachers. Thus begins her downward spiral into drug addiction and prostitution, and ultimately assassinations for a kingpin mob boss.

Review: Even as a high school senior, Kim (one-time only star Jill Lansing) is a callous, heartless bitch, intent on self-destructing her life, and there’s not a shred of the girl who might have once fallen in love, been loved, or had a trace of the good nature we as the audience keep hoping she’ll show. She’s still stinging from seeing the aftermath of her father’s suicide, and she’s recently been dumped by her boyfriend, who’s already moved on, and she prowls around with her girlfriend in complete and utter boredom and disdain, hoping for trouble. Her grades at school are a disaster: She hasn’t done a homework assignment in months, and her teachers keep threatening to fail her and keep her from graduating, and throwing everything to the wind, she decides to become a prostitute and make some cash because why the hell not? After becoming a big hit with the local men (she sees her clients in a dumpy van, and her pimp is a disgusting dope dealer), she quickly surmises that in order to get ahead in school she must seduce her middle-aged teachers, and then blackmail them into giving her “A’s.” It works because she’s got nothing left to lose at this point in her miserable life. She soon gets handpicked by a higher class of pimp: He offers her a bigger cut of her work efforts, and on her first gig, she ends up killing her john because he becomes out of control. She gets a high from it, and her boss sees potential in that, so he gifts her a gun with a silencer! She escalates from a drugged out whore to a carefree hit woman, and while that sounds exciting, she seems to know deep down that she’s being used. All she wants is to go on vacation and “get her body out of hock,” but she gets a fated assignment to kill someone she knows, and the task proves to be just beyond her capabilities.

Malibu High is a wolf in sheep’s skin. The title, poster artwork, and general air to it (if you’ve never seen it or read about it) suggests that it’s going to be one of the sexy teen comedies that bubbled up from the ’70s and frothed all throughout the 1980’s. Let me be clear: This is not a comedy, and it ain’t a bowl of punch. It’s a grungy grindhouse odyssey, and after watching it you feel like you’ve been through the meat grinder. If you thought Lemon Popsicle or The Last American Virgin was rough, wait till you watch Malibu High. Star Jill Lansing is a wonder to behold in her only role on film. She’s rough around the edges (so is the script), but she fills the role with the utmost conviction and she’s 100% that character. For those interested, she’s nude for almost the entire length of the film, but she’s a monster. She’s fearless in the movie. When this was released in drive-ins and theaters, it must have felt like a bomb blast of vitriol, but it’s perfect for today’s jaded and jilted audiences, looking to be dunked in a profaned youth culture. In many ways, this movie feels prescient. It’s depressing as hell, let me tell you, and so if you’re in the market to watch something that is completely unlike most of the young adult coming of age tales you’re used to watching, then here’s the movie for you. It was directed by Irvin Berwick.

Previously released on a double feature DVD containing two Crown International pictures, Malibu High has just been released onto Blu-ray (newly scanned and restored in 2K from 35mm elements) from Vinegar Syndrome. The picture quality is clear, sharp, and filmic, and the movie has never looked or sounded better. Bonus features are aplenty on the two-disc set (it comes with a bonus DVD as well): there’s a group commentary track, video interviews, two short films from the producer (circa 1975 and 1976), and more.