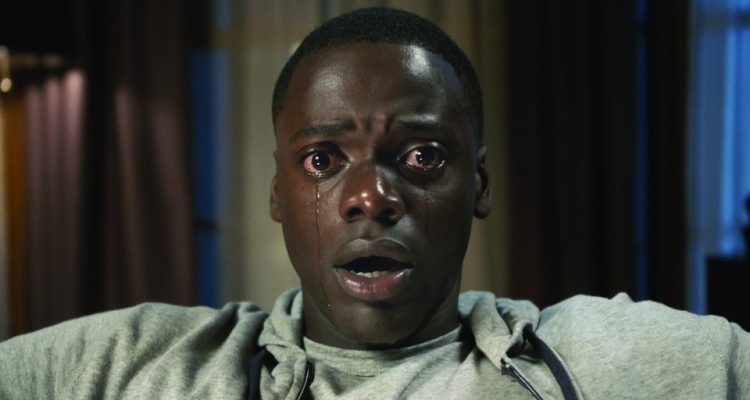 Review: My apologies, we are rather late to the party with this one.

To say that Jordan Peele’s directorial debut is not for the faint hearted would be an understatement.  Critics worldwide have acclaimed this film for its biting social commentary, and the director deserves kudos for grappling with some major current issues.  Obviously, it is about racism, but let’s not get too serious here, it is also a really silly horror film.

A young interracial couple travel out of the city to meet the woman’s wealthy white parents, who live in a big house in the suburbs.  The woman is Rose Armitage (Allison Williams), and her parents have not been made aware that Rose is dating a black man.  The tension is there right from the start of the film, and gets really uncomfortable when the boyfriend, Chris Washington (nicely played by Daniel Kaluuya) is introduced to her folks.  Her parents Dean (Bradley Whitford) and Missy (Catherine Keener) are cordial on arrival, but the veneer of respectability soon vanishes, and the tension increases with the arrival of Jeremy (Caleb Landry Jones), Rose’s complete asshat of a brother.

I will not go into the details of the plot from here, but it reminded me of The Stepford Wives with its theme of scratch below the polite surface, and you will discover that people are seriously messed up.  And boy is this crowd messed up.

Peele builds the tension nicely, although the film does feel a little long.  It is weird from the start, and strangely humorous in parts.  I am not sure the humour sits easily alongside the bizarre plot and dark themes in the story.  Peele may have been trying to lighten the mood, however I thought it set the film off balance a little.  The social commentary underneath is very current and worthy of exploration, and is not a funny subject at all.

By the third act of the film, we are firmly in horror territory and all rational debate about racism and today’s response by middle class white people is thrown out the window.  I thought the story was so weird and ludicrous by this point that the film had lost its power and its edge.

However, the cast is uniformly excellent, and Jordan Peele warrants praise for confronting a difficult and divisive subject in such an unusual way.  The unsettling atmosphere and strange people at that big house will stay with you for a while afterwards.

Get Out will definitely make you think about modern attitudes to racism, and also tremble at the unnecessary surgery.

This movie is a fun watch on a Saturday evening, and Jordan Peele is undoubtedly a great emerging directorial talent.  That aside, the film has been rather over-hyped by critics who are impressed by its controversial subject matter, but are clearly happy to overlook the fact that it is totally ridiculous.