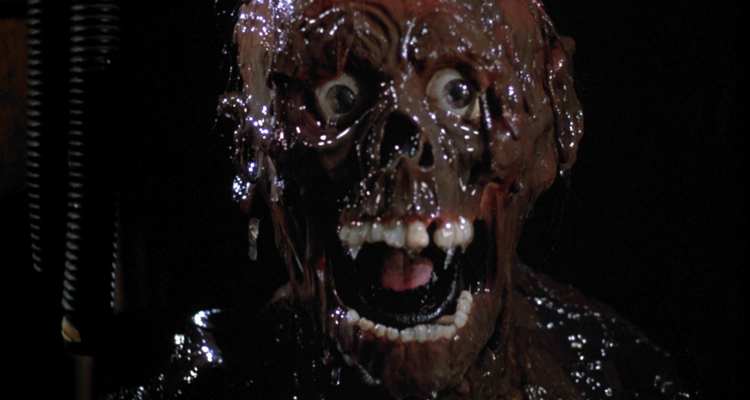 Revisiting The Return of the Living Dead

I’m going to put my hand up and say that this is my all-time favourite zombie movie; sure, there are better ones with more serious undertones and even The Walking Dead’s constant lack of hope or levity is more for the modern age but me, I like my zombie flicks to be daft and The Return of the Living Dead is like watching a 90-minute party.

It’s basically 80’s punks vs. endless hordes of the undead but rather than making you feel utterly miserable it has a kick ass rock soundtrack and a lighthearted tone which remains throughout the movie even when the bodycount starts to rise.

It’s also got a chick who is naked for pretty much the entire runtime… even once she becomes a zombie which is awkward and yet still kinda hot.

You’re just smiling from beginning to end as it never takes itself too seriously but also references Night of the Living Dead from George A. Romero which remains one of the most influential zombie movies of all time.

It’s only 90 minutes long and it takes a little while for any really cool stuff to happen but it still holds up, especially the make-up effects which (for The Tar Man especially) are impressive.

Some of the acting may be less than stellar but that’s part of the charm. There are little things going on in the background too like the “eye test” which spells out Burt is a Slave Driver amongst other tidbits.

I also love how the zombies don’t drag themselves along slowly like they normally do in other movies; in this they are fast. They run, they speak and most importantly they think and feel. I love the scene with The Tar Man using a pulley to try and open the door to get a potential victim as it made him all the more scary. Another high point is when the half corpse is chained to the tabale and speaks saying how eating brains eases the pain of death; she can feel her body rotting which was quite a disturbing thought.

So if you’ve never seen The Return of the Living Dead then you should check out the new Blu-ray from Shout Factory ASAP as it’s a must have classic.