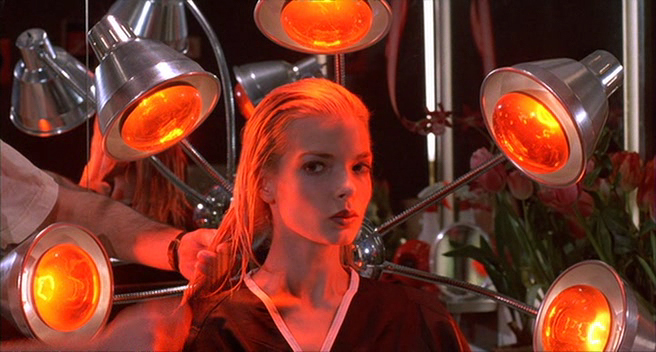 A unique movie which remains very underrated. The Blu-ray gives it the respect it deserves with lots of special features.

Plot: A director makes a movie based on a murder he committed.

Review: A beautiful young model is rudely interrupted in a photo shoot: Her country bumpkin husband has travelled across the United States to find her, and he basically abducts her, with the intent of taking her back home where she left her life (and toddler) behind to pursue her dream of making it in the movies. When back at the hotel, Mary Jean (played by Zoe Tamerlis from Ms. .45) manages to give her husband Keefe (Brad Rijn) the slip, and she finds her way to the bungalow of a sleazy filmmaker where she was once rejected at one of his parties. The filmmaker – Christopher Neville (Eric Bogosian) – is in the middle of a downward career spiral, and so he lets her in, and promptly creeps her out when he tries to film them having sex, and when she insults him, he murders her. He comes up with a plan: Cover up the crime by making it look like someone else did it, and it works. Detectives show up at Mary Jean’s apartment where Keefe spent the night, and they book him for murder because all evidence points to him. But there’s a twist: Keefe is certain Neville is involved, and when Neville is questioned about Mary Jean, he pulls a fast one by inviting not only the police, but Keefe as well, to participate in his latest inspired project: a film about the murder of a young starlet who dreamed of making it big in the movies …

From cult director Larry Cohen, Special Effects is an interesting hybrid of a film, with thriller / mystery vibes, but it’s also somewhat of a send-up of Hollywood-isms and tropes, with a backstage pass to the weirdness and sleaziness of how the movie business and fame affects so many people. Part horror film (that would appeal to fans of giallos, or other films of that ilk), and part insider view of the filmmaking process, Special Effects is an underrated movie that can’t quite be compared to any other feature. If you’ve seen and enjoyed movies such as Fade to Black, you need look no further for your next fix on Hollyweird.

Olive Films has just released a superb looking Blu-ray of Special Effects. For years, the only way to see the film was on the previous DVD from MGM, and now that Olive has put the movie back in print, a whole new generation of cinephiles can discover it. Olive’s release contains an audio commentary by director Cohen and Steve Mitchell, who just directed a documentary about Cohen called King Cohen.