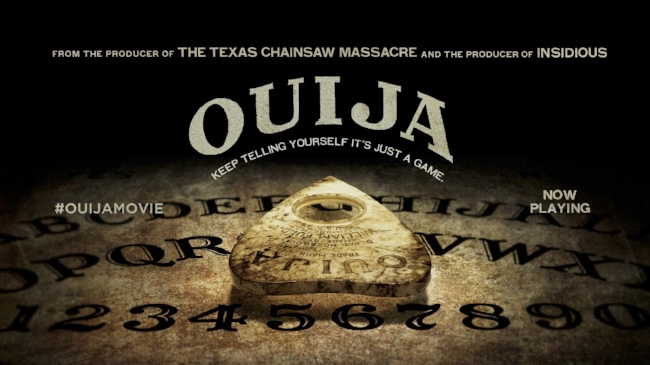 Ouija is slick enough and some of the scares are effective; it just doesn’t really stand out and there are better movies with similar subject matters that will do the job better.

Plot: Following the sudden death of her best friend, Debbie, Laine finds an antique Ouija board in Debbie’s room and tries to use it to say goodbye. Instead, she makes contact with a spirit that calls itself DZ. As strange events begin to occur, Laine enlists others to help her determine DZ’s identity and what it wants. As the friends delve deeper, they find that Debbie’s mysterious death was not unique, and that they will suffer the same fate unless they learn how to close the portal they’ve opened.

Review: I’ve always enjoyed movies and TV shows about Ouija Boards; it’s a fascinating subject but it’s not something I would ever mess around with in real life.

I’ll be checking out The Origin of Evil this weekend so I thought I would revisit the first movie in the series.

Despite a few decent jumps sadly Ouija is really quite dull and doesn’t take full advantage of the scary potential of the subject matter; it’s quite boring for the first half and the story is incredibly predictable.

There were no surprises in the script and the characters were all bland; the main face you’ll recognize is Lin Shaye in a small but pivotal role but it would be unfair to dismiss the cast as the acting in general is far better than we’re used to in the horror genre.

Laine Morris (Olivia Cooke) was nice enough in the lead but for once you nearly felt bad for her friends who all die mysteriously because of her. I liked how they were actually likable and felt realistic rather than just annoying jocks that you can’t wait to see killed.

It lacks the sophistication of recent horror movies like The Conjuring series and when you are 15 minutes ahead of the narrative then that’s not a good thing either.

Overall, Ouija is slick enough and some of the scares are effective; it just doesn’t really stand out and there are better movies with similar subject matters that will do the job better.