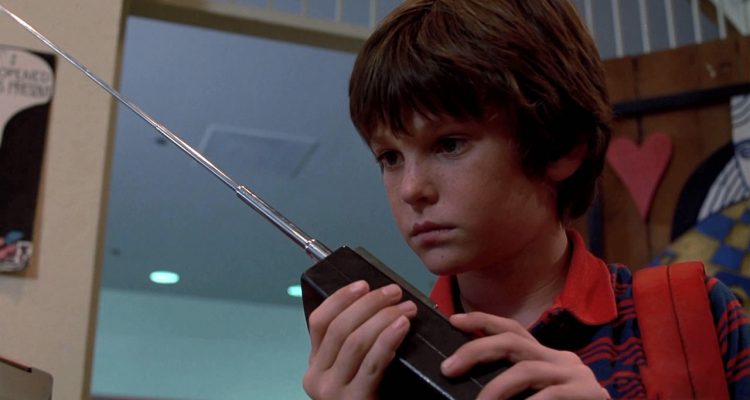 Plot: After witnessing a murder, Davey Osborne (Henry Thomas) and his imaginary friend, super-spy Jack Flack (Dabney Coleman), try to protect a game cartridge containing secret information on a new form of fighter plane from a slew of killers.

I remember this movie as a kid, watching it on beta. I was a fan of it when I saw it, but it had been 30-odd years, so it was almost like a brand new movie when I watched it again. I am glad to say that it still holds up, and it holds all the charm I remember it having as a kid.

I will say that for a movie that centres around the fate of a video game, it’s weird to hear the characters constantly talk about the game as a “tape.” Nope, it’s not a tape – it’s a cartridge.  Even if the writers didn’t know that you called it a cartridge, in no way, shape or form does it even resemble a tape.

While there are certain things that I noticed with my adult eyes that I glossed over as a kid (such as why the fate of such a valuable piece of information would be housed in a public building with easy access as opposed to at a military installation, or how three grown men can constantly be thwarted by a twelve-year-old…eh, better not to think about it), this is still a fun adventure. They really knew how to write kid roles back in the 80s, as I am happy to say neither Henry Thomas nor the actress who plays his best friend are annoying. Dabney Coleman is terrific in the dual role of Jack Flack and Davey’s dad. Jack’s presence is sorely missed when he is not in the movie, as it seems more plausible for Davey to elude his pursuers if he has Jack at his side. Plus, Coleman’s enthusiasm in the part is just so damn infectious.

I will say that this movie has one of the best swerves I think I’ve ever seen. If you haven’t seen the movie, I won’t spoil it for you, but let’s just say that their characters in the film that you peg as belonging to a certain stereotypical archetype, and when you find out that assumption is way off, you’re both pleasantly surprised and intrigued on how everything is going to play out.

Unfortunately, the one significant effect in this movie did not come off well.  It was done through matte photography, and it just doesn’t hold up and looks really unconvincing. I know that they did it for a dramatic effect, but it just didn’t work, and I wish they hadn’t put it into the movie, to be honest.

The cinematography is good, and takes full advantage of being filmed in San Antonio – they take the time to show off a couple of landmarks in the city.  The score is good, but not particularly memorable. The action is pretty decent when it occurs, and at least you can see everything clearly, something I, unfortunately, can’t say for today’s movies.

This is just an enjoyable movie, one that harkens back to a simpler time when filmmakers focused on entertaining audiences with good, old-fashioned storytelling, instead of the current spate of films that seem to get wrapped up in their own self-importance.  If you’re looking for a great time, with some solid adventuring, a decent concept, and a feel that takes you back a decade or so, this is the movie for you.