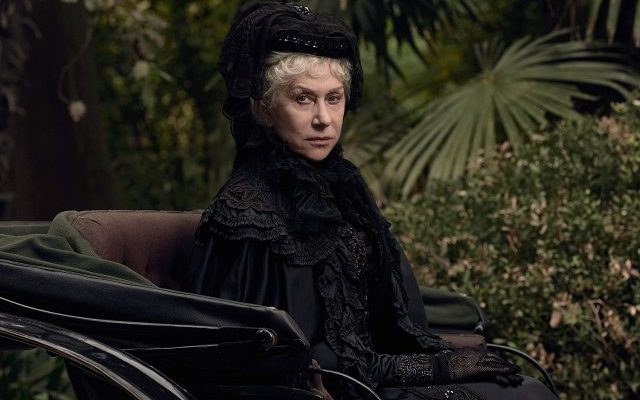 Winchester falls prey to the same jump-scare nonsense that is rampant through modern-day horror films. That being said, the setting and atmosphere are (literally) killer.

Plot: A psychiatrist (Jason Clarke) is hired to give a psychiatric fitness assessment of the eccentric owner of Winchester Repeating Rifles in her bizarre mansion.

Review:  Before seeing this movie, I had some familiarity with the real-life story behind the plot. I have an interest in hauntings stories, and the Winchester “Mystery” House is reputedly one of the most haunted places on Earth.  It is undeniably a fitting atmosphere for a ghost story, and the story behind it and its legendary owner is ripe to be told.

Unfortunately, the end result doesn’t really do justice to the setting in which it takes place. Oh, I don’t mean that it’s horrible or anything – on the contrary, if I got awful, at least that would have been something. What I got was just kind of…ordinary.

Let’s start with the standouts.  The sets are fantastic.  I think they shot some of it in the actual Winchester House, and it’s definitely the best part of the picture. You can understand why the people would think the place is haunted, even with its grim and somewhat wild backstory. There’s no real rhyme or reason to the house (actually, the move forwards a notion, and I have to say, it’s pretty clever and inventive), and the filmmakers were smart enough to shoot in such a way that you’re consistently closely following the main character through the winding hallways and rooms, with no idea of where you’re going. The fear of getting lost in the house, which is massive (nearly 100 rooms in the movie), is even more tangible than whatever ghost is going to come popping out of thin air.

The story itself is okay. You can basically guess how everything is going to unfold, and other than the explanation of the room, there are few surprises.  The surprises we do get are somewhat contrived and forced. They’re not bad, but you get the feeling that the screenwriters were trying to tie everything together needlessly instead of allowing the action to unfold naturally.  I didn’t hate the story, but it wasn’t terrific.

As for the acting, I think the best way to describe it is functional.  Helen Mirren can’t give a bad performance (the Razzie she was nominated for this movie aside), and Jason Clarke has a charm about him that makes his character likeable, even with his scruples. The rest of the cast is there, and don’t provide much one way or the other.

The most annoying thing about the movie is the constant use of jump-scares, especially early in the film. It seems the continuous trend in modern horror movies is, the camera will present an empty room, which a character will enter. They will walk around or do some activity, and eventually, a previously empty space will show a ghost in ghoulish makeup. At the same time, the previously quiet score will erupt in a sudden loud cue, which I suppose is to signal to the audience that they are to be scared now. It’s so stupid, and treats the audience as such idiots, that I can’t stand it. It’s also incredibly lazy – in this movie, hardly anything “scary” happens in the first half, except for these annoyances. This sort of crap makes me so angry, even reading this paragraph back pisses me off.

There’s nothing really to add about this movie.  It is a perfectly bland film that is only elevated by the setting in which it takes place. If you’re interested in the story behind the Winchester House or seeing it as the setting for a horror film, then I recommend it, because it definitely would be worth your while. If not, though, you can probably spend better use of your time watching something else.