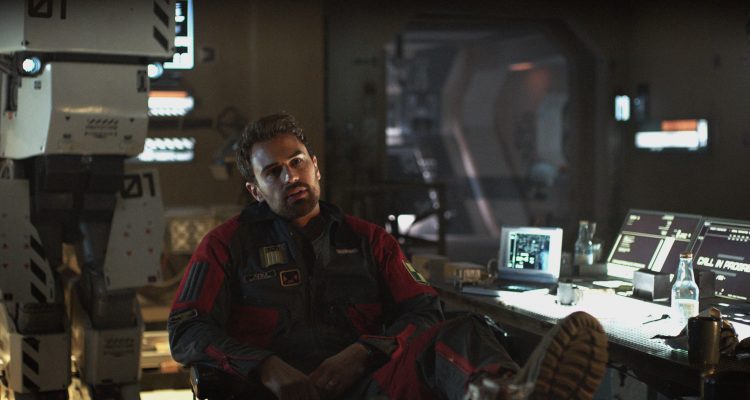 Archive is a sci-fi film that transcends the genre and takes you on an emotional journey through its isolated landscape. Theo James gets a chance to really show off his acting skills and delivers in spades. First time director Gavin Rothery has staked his claim as a writer/director to watch and delivers a must see film.

Plot: 2038. Two and a half years into a three year research contract, George Almore is on the verge of a breakthrough. Stationed halfway up a snow-capped mountain near Kyoto at a secret facility , he has been working on a model that is a true human-equivalent android. His prototype is almost complete. But this most sensitive phase of his work is also the riskiest. Especially as George has an ulterior motive for his work that must be hidden at all costs: Being re-united with his dead wife, Jules.

Review: Every once in a while a movie comes around that totally catches you by surprise. Archive is one the those films. Based on the trailer, you would be forgiven for assuming this was a standard ‘grief stricken inventor tries to bring loved one back from the dead’ story. Archive is far more than that – it takes that zeitgeist and gives it its own unique spin. Written and directed by Gavin Rothery, the conceptual designer and a visual-effects supervisor on the Duncan Jones film Moon, Archive grabs you from the very beginning and never lets go. It’s sparse landscape and settings look like it could take place in the Moon universe, and that isolation and sereneness only add to the overall vibe of the film.

Theo James delivers a stellar performance as George Almore, a robot designer working in desolation at an old facility code named ‘The Garden”. He is tasked with creating generation one and two robots for his employer, while really spending most of his time working on a generation 3 version, that he plans to be a host for his wife’s stored consciousness that is currently being stored in The Archive. This data deteriorates over time, so George must work quickly if he is going to be able to keep his wife’s essence alive and transfer it in time, all while dealing with corporate interference and outside forces.

As he works to complete the J3 model to host his wife, George is assisted by his previous work, the J1 and J2 models. J1 is a larger hulking robot that has the intelligence of a 5 year old human, while J2 is at a 15 year old level. These robots are really James’ co-stars in the film and his interaction with them on screen really make them ‘human’. J2 looks out for J1 and displays characteristics typical of a 15 year old girl; insecurity, doubt, and jealousy. It is here where Rothery really shines in his use of tried and true sci-fi tropes and turning them on their head to create something totally new and unexpected.

Archive, like Moon, is visually stunning. It is a stark and utilitarian setting that provides us with a cold beauty that conveys the sense of isolation and futurism, all backed with a stark electronic soundtrack provided by Academy Award winning composer, Steven Price. (Think M83 meets Kubrick)

To give any more details of the plot would be venturing far to close to revealing the end of the film, but suffice it to say, you will not see it coming. Rothery does such a marvelous job of letting the story breathe, that when the finale does hit, it is like an emotional gut punch coming from all angles.

Science fiction is one of my favorite genres and as such I have seen a lot of sci-fi movies. Some good, some bad, but all unique in their own way. I can honestly say I have never seen anything like Archive. For me, this film truly is a game changer and ranks as one of the best films I have ever seen.

Archive is available now on demand.