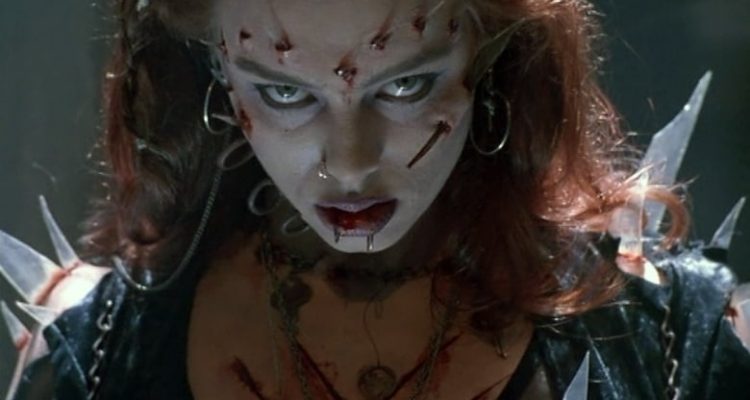 The film is gruesome, gory, and horrifying, and hardcore horror fans should have a field day with it.

Plot: Having recently witnessed the horrific results of a top secret project to bring the dead back to life, a distraught youth performs the operation on his girlfriend after she’s killed in a motorcycle accident.

Review: Just when the Return of the Living Dead franchise should have taken its last breath, extreme horror filmmaker Brian Yuzna – the nut who made Society, Bride of Re-Animator, and Faust – completely revitalized the brand with his in-your-face onslaught riff on the “Living Dead” concept and came up with something that became a cult film all on its own. Young punk lovers Julie (Melinda Clarke) and Curt (J. Trevor Edmond) have a doomed romance: Curt is an Army brat living on a base with his dad, the hard-nosed Colonel Reynolds (Kent McCord), who is part of the team overseeing the militarization of reanimated corpses. After a reanimation test goes horribly wrong, Curt’s dad is reassigned, but instead of complying with his father, Curt decides to run away with Julie and live life freely on the road. But they don’t even make it off the base: They get into an accident, which instantly kills Julie. Knowing that his father has been experimenting with the reanimation of the dead, he breaks into the scientific facility, lugging his dead girlfriend along. He gives her the serum, and sure enough she comes back to life … but something is clearly wrong with Julie, who begin exhibiting self-mutilating tendencies and an insatiable hunger. Colonel Reynolds and his team realizes that a zombie has escaped the lab, and they hunt Curt and Julie down, leading them on a chase into the sewer system where Julie has infected derelicts and a couple of hoodlums, which leads to all-out chaos as the military closes in on the growing number of a zombie horde that Julie has created. And as for Julie herself … she turns herself into a Bride of Frankenstein-type monolith of pain, misery, and rage as she embraces her inner zombie and becomes a tragic figure that cannot be stopped.

Return of the Living Dead III isn’t for the faint of heart, but it’s definitely an original take on the living dead formula, which (let’s be honest) was humdrum even in 1992. Yuzna, using state of the art make-up effects, costuming, and animatronics (and other movie magic), made an almost iconic movie monster out of Julie, played by Melinda Clarke. The film is gruesome, gory, and horrifying, and hardcore horror fans should have a field day with it.

Lionsgate is about to release Return of the Living Dead III as part of their “Vestron Video Collector’s Series” (it’s #4 in the series), and they’ve pulled out all the good stuff to ensure that this release is the ultimate edition of this film. It’s available widescreen for the first time in North America, and includes both the “R” rated version and the “Unrated” version, as well as a commentary, interviews, and more, including a still gallery and trailers. If you’re a completist like me, you’ll need to make this edition a must-purchase.