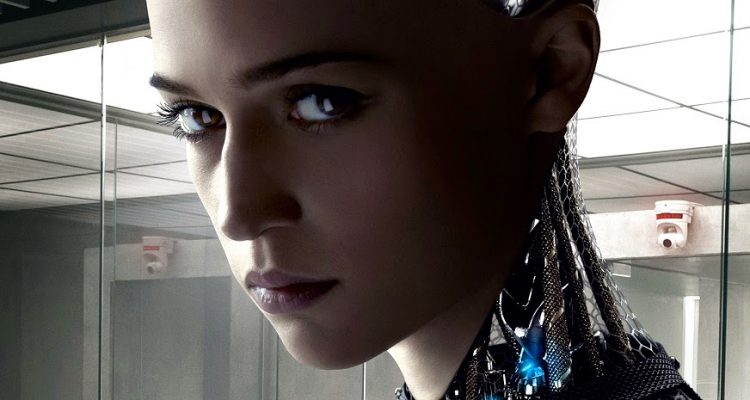 Plot: Caleb Smith (Domhnall Gleeson) a programmer at a huge Internet company, wins a contest that enables him to spend a week at the private estate of Nathan Bateman (Oscar Isaac), his firm’s brilliant CEO. When he arrives, Caleb learns that he has been chosen to be the human component in a Turing test to determine the capabilities and consciousness of Ava (Alicia Vikander), a beautiful robot. However, it soon becomes evident that Ava is far more self-aware and deceptive than either man imagined.

Review: I love science fiction movies.  Particularly when they are the cerebral type which make you think about the world and our place in it.  And is this the case with Ex Machina?

No, not really.  It makes you think about how robots are not humans, and also how you can stay awake during it without a caffeine IV inserted into you.

First, the good stuff:  The cast are uniformly excellent.  Oscar Isaac is phenomenal as Nathan, the mysterious genius behind a company specializing in cutting edge synthetic intelligence.   Domhnall Gleeson is Caleb, a talented young programmer chosen to evaluate the human characteristics of a state of the art Artificial Intelligence, who (which?) goes by the name of Ava.  Ava is coolly portrayed by Alicia Vikander, a talented Swedish actress. Gleeson perfectly captures the wide eyed wonder of Caleb, who may turn out to be a bit too clever for his own good.

So, what’s bad?  Just one thing: this is one of the most boring films I have watched this year.  The script lacks dynamism and the whole thing feels so flat.  Despite some interesting philosophical themes, the story never really crackles to life.

The visual effects are just wonderful, however:   how the robots peel back their skin to reveal their technologically stunning innards.  It is the style of this that I really liked.  The picture was filmed in a beautiful, remote looking area of Norway.  The landscape joins with the interior of the research facility to create a very sterile, chilly environment.

Nathan has clearly spent too much time on his own exploring the possibilities of AI, and really comes across as a bit of a dick.  Isaac imbues him with a sinister quality right from the get go, and the development of that character is fun to watch.  Caleb is a smug programmer (and we have all met plenty of them).  He is quite likeable, but you kind of want to punch him in the face too.

The film toys with your own preconceptions of what a world populated with robots would be like.  How would the synthetic beings live alongside the human ones?  Would we be able to interact successfully with them?