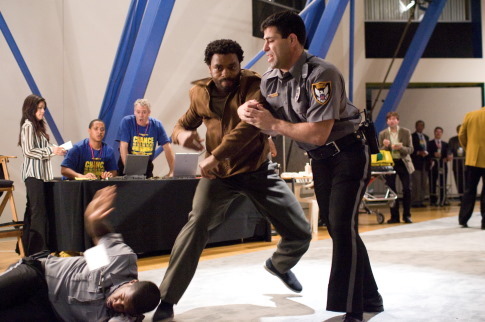 Redbelt has an excellent performance by Chiwetel Ejiofor; however, it suffers from a very contrived storyline, lousy shooting of the action, and generally despicable characters.

Plot: Brazilian Jiu-Jitsu teacher Mike Terry is forced to enter an MMA tournament after a diabolical scheme kills a friend and leaves him needing money.

Review: I have a lot of respect for David Mamet. The man has written some stories that I have considered excellent. Spartan, The Untouchables, Wag the Dog, The Edge, Ronin…hell, he did what he could with Hannibal, and the book it was based on was terrible. So, I thought that Redbelt would be another great movie in a long line of fine Mamet-scripted movies. Much to my surprise, this was a rare misstep from a guy who rarely misses.

Let’s start with the good.  Chiwetel Ejiofor, as you would expect, was excellent.  His character, Mike Terry, is the heart and soul of the film, and other than Jose Pablo Cantillo’s underutilized role as Snowflake, is pretty much the only person you can one hundred percent get behind in the movie.  Ejiofor is one of those actors who doesn’t need dialogue to give you insight into what the character is feeling.  Just a look, a silence, it all speaks volumes. He is a gifted actor, who I have never seen give a mediocre performance. All I can say is, this guy needs to headline more films.

As for the story – well, as usual, Mamet is great at dialogue. There’s just ways that he frames conversations between characters, the pauses and sometimes talking over one another, it feels authentic. That being said, this was not his best outing. The storyline for this painfully tries to elicit old samurai movies (which Mamet acknowledged was the inspiration for the film), and it just doesn’t work. The storyline is too contrived, too many coincidences take place that lead to unfortunate events, and the final reveal at the end of the film was just ludicrous – I don’t even feel that what was revealed is humanly possible. I get that it’s a movie, and there’s a certain amount of leap of faith that the audience is asked to do, but in this case, the chasm in that leap was too vast for me to stomach.  It felt like the movie was just trying to be clever for the sake of being clever.

The fight choreography was pretty bad. For a movie about mixed-martial artists, there is a dearth of actual fighting scenes, and the ones we got were now well-mounted. It wasn’t like there was shaky-cam or anything, it was more in the edits and the angles that were chosen to shoot the scenes. It was like, parts of the fights were missing, and I just felt like the fighting didn’t matter to Mamet, that the world in which he was telling the story was only there for convenience, but hell, when you have guys out there who are supposed to be trained martial artists, you want to see them fight. What we got was very little of that, and what we did get, felt like it was shot in fits and starts.

Lets now move on to the biggest problem with the movie – the characters.  Other than Chiwetel Ejiofor, I hated everyone.  Alice Braga plays his wife, and literally, at no point in the film did I feel like these two were legitimately married. She complained and nagged him constantly, showing next to no compassion or affection towards him other than one scene. I literally wondered non-stop when we were getting the scene where he was going to tell her he wanted a divorce. The other characters, especially Joe Mantegna, Ricky Jay, and dear lord, the worst offender, Rodrigo Santoro, were so damned ridiculously, outrageously despicable, that you’re going to be begging for Ejiofor to roundhouse all of them or get an uzi and just mow them all down. They are so over-the-top, so ridiculously evil, it’s outrageous. For those type of characters, you need like, a John Woo finish where everyone dies but the director. Instead, what we got was wholly unsatisfactory, and the main people punished were people who quite arguably, didn’t deserve it.  Yes, one of the baddies gets taken out, but not enough for my satisfaction. I walked away from this film feeling extremely unsatisfied at the outcome, and that’s never a good sign.

There’s not much else to say.  I mean, this movie is not terrible, and it has enough interesting bits and moves along at a brisk pace, so it’s not like I was bored.  I just found it extremely disappointing, because I’ve seen better from Mamet.