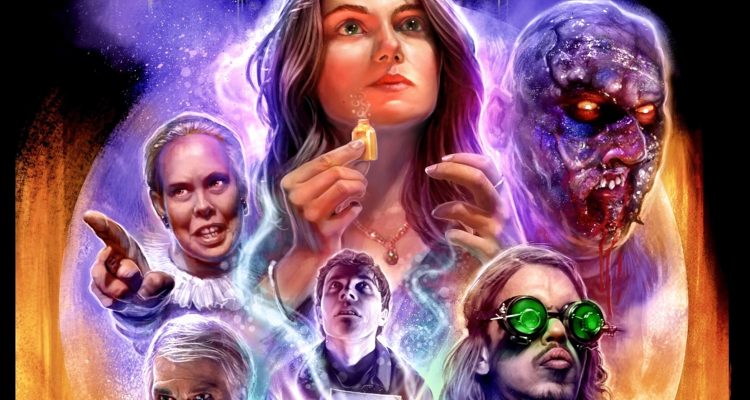 Ravenwolf Towers is a really bizarre, but inherently likable throwback to the heyday of the Full Moon years.

Plot: Jake, the young new assistant manager of an ominous decrepit hotel called Ravenwolf Towers, explores his new workplace. Once the Mecca of Hollywood elite, the place is now but a ruin populated by freaks and run by a crazy inbred family.

Review: The Ravenwolf Towers hotel has become a place of transients, where once it stood as a monument to the Hollywood hoi polloi and royalty of a bygone era. Turns out there’s a family of freaks living on the top floor, and their matriarch is a beautiful young woman who is some kind of vampire, and doles out the meat of her victims to her disgusting and weird children, who include a pair of gobbledygook twins, a hulking monstrosity named Samson, and a weird old matron lady who is her daughter. Under their employ in the hotel is a mad scientist who is performing experiments on their victims to harness soul energy (or something) using an ancient artifact that could possibly harness the power of the fountain of youth using the souls of humans. Lurking about the hotel is a dwarf doctor who uses ensorcelled goggles that can detect evil in its truest form, an artist who has created a little doppelgänger of himself in the form of a puppet that can come alive, and the new assistant manager of the hotel, a young sap who falls in love with the beautiful lady upstairs. The strange thing is that she falls in love with him too, leading to an especially awkward bit of explaining when he figures out that she’s the mother to the freaks on the top floor.

From Charles Band and Full Moon, Ravenwolf Towers is a really bizarre, but inherently likable throwback to the heyday of the Full Moon years, and it was intended as a miniseries to be shown exclusively on Full Moon’s website. This feature film version is only about half of the series, but it’s a fun beginning, and if you’ve ever had any love for Full Moon, then this title is especially for you. It’s full of weird gore and violence, sex, nudity, and a score by Richard Band. There’s a lot going on in this 79-minute feature, and it promises more to come, and let’s hope Band releases a Part 2 as soon as possible to wrap up all the story threads.

Now available on DVD, Ravenwolf Towers comes only on DVD (not Blu-ray, yet), and comes with trailers, and a making-of feature.