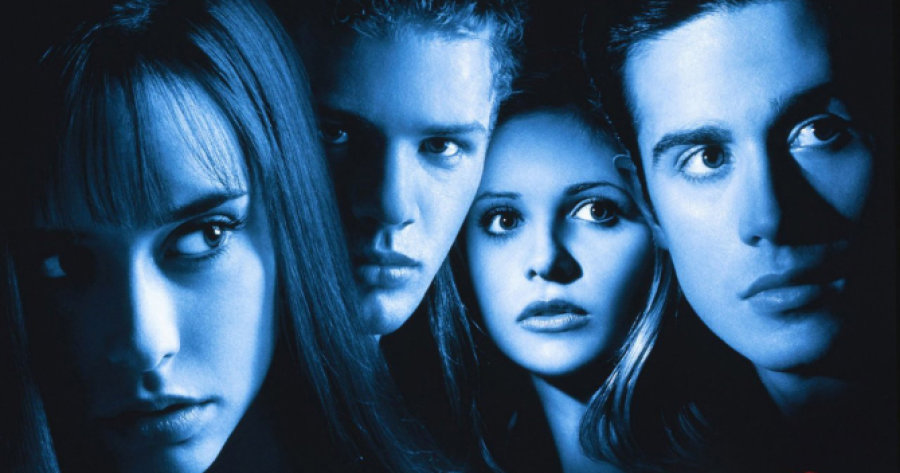 Mill Creek’s triple feature of these three titles is packaged under the title “Queens of Scream,” and while all three films are from the Sony / Screen Gems factory, I’m not sure they were bunched up properly. I would have preferred both I Know What You Did Last Summer films, plus maybe When a Stranger Calls, but as it stands, these three horror / thrillers are packaged together and that’s just the way it is.

Plot: Four young friends bound by a tragic accident are reunited when they find themselves being stalked by a hook-wielding maniac in their small seaside town.

Review: Four young people with their whole lives ahead of them (played by up and comers at the time Sarah Michelle Gellar, Ryan Phillippe, Freddie Prinze, Jr., and Jennifer Love Hewitt) get a little rowdy and out of control on a deserted road when they hit a man with their car by accident. Instead of taking the man to the hospital, they agree to finish him off by drowning him in a lake to save their asses from any jail time. A year later, and all four of them are living with the immense guilt over the murder they committed, and on the anniversary day of their fateful act, they each receive a note stating “I Know What You Did Last Summer,” which puts them all at odds with each other, because they think one of them is playing a sick game. Turns out there’s a very real killer in their midst, and he’s got a big hook to do them in with. One by one, the bodies pile up, and if they don’t come together for a plan of some kind, they’ll all be victims of the mysterious killer.

Released at the height of the resurgent slasher boom of the 1990’s, following the success of Scream, I Know What You Did Last Summer was precisely the sort of thing that connected with audiences looking for more of the same. It plays the kills pretty safely (very little blood and gore, or sex, for that matter), and it features pretty actors who weren’t very edgy. Still, it’s an enjoyably non-challenging slasher and it holds up pretty well. I saw this theatrically and I remember thinking it was nowhere near in the league of Scream, but it didn’t have to be. From director Jim Gillespie and screenwriter Kevin Williamson.

Plot: During a babysitting gig, a high-school student is harassed by an increasingly threatening prank caller.

Review: A high school track athlete named Jill (Camilla Belle) takes a babysitting gig at a posh doctor’s house in the middle of nowhere, and the house is one of those ultra modern places with all the amenities … like an indoor aviary, for example. Meanwhile, a serial killer who preys on children is on the loose, and he’s somehow targeted this house on this night, and when he starts calling the house from within the house to mess with her head, Jill’s night turns out to be a night of pure terror as she tries to survive while trying to protect the two little kids sleeping upstairs.

A remake of a the superior 1979 slasher / thriller with the same title, this When a Stranger Calls from director Simon West ditches what made the original so fascinating and compelling, which was the entire subplot that dealt with the killer’s life and point of view. In this version, the story is distilled to contain just the prologue of the original, and while that’s an obvious and safe choice, it just doesn’t muster up the absolute terror of the original. As it stands, it’s a serviceable little thriller and very slick looking, but it ain’t got nothing on the ’79 film.

Plot: A married couple becomes stranded at an isolated motel and finds hidden video cameras in their room. They soon realize that unless they escape, they’ll be the next victims of a snuff film.

Review: An unfortunate breakdown of their car on a secluded road forces a married couple (played by Kate Beckinsale and Luke Wilson) to stay the night at a creepy little motel down the road, and when they start watching television, the tape in the VCR is some kind of slasher video. When they realize that the video was shot in the very room they’re staying in, they come to a shocking realization that the movie was a snuff tape, and that they are most likely going to be the stars of the next video. With hidden cameras in their room, and with a staff of skeezy killers watching in on them, they must hunker down and prepare for a night of anything-goes survival.

An easy sell for a fairly low budget genre film with some marquee names to sell it, Vacancy leaves you feeling pretty icky by the time it’s over. Snuff is never a fun subject, but the film manages to keep you invested, thanks to the performances by the two leads. Frank Whaley and Ethan Embry play really good scumbag bad guys in the movie, and you’re really rooting for them to get their come-uppance. From director Nimrod Antal.

Mill Creek’s triple feature of these three titles is packaged under the title “Queens of Scream,” and while all three films are from the Sony / Screen Gems factory, I’m not sure they were bunched up properly. I would have preferred both I Know What You Did Last Summer films, plus maybe When a Stranger Calls, but as it stands, these three horror / thrillers are packaged together and that’s just the way it is. The high definition transfers are crisp, and as a bonus, they’ve also included the DVD edition of the triple feature. No special features are included. This package is priced under $10, so you can’t beat the price. 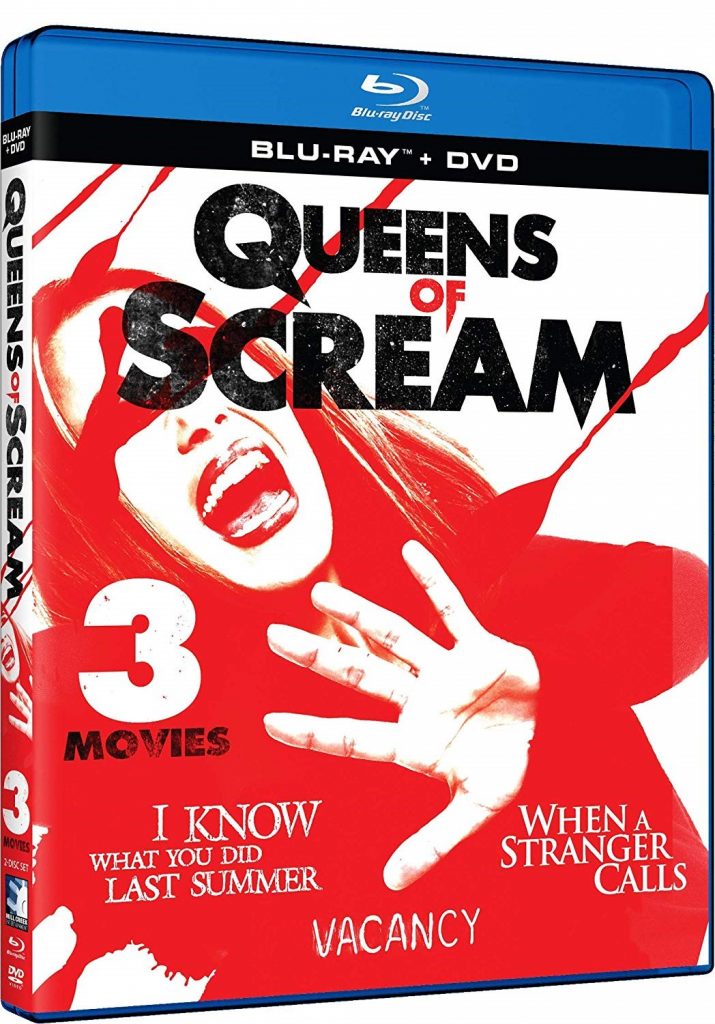