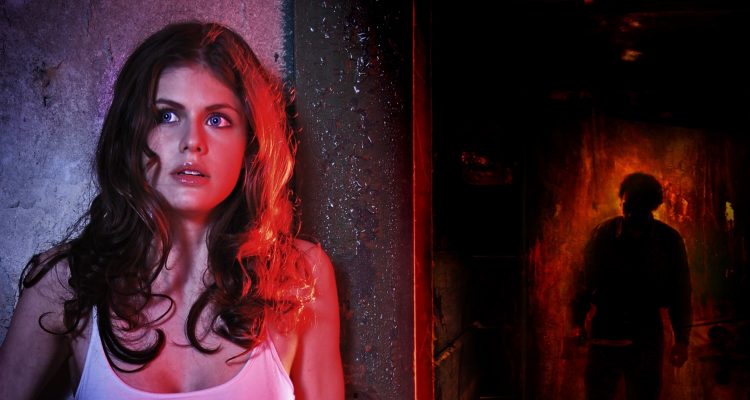 Plot: The horrific account of 6 year-old Martin Bristol, abducted from his backyard swing and forced to witness the brutal crimes of a deranged madman.

Review: A mute child who feels no physical pain is abducted by a serial killer from his front yard and is systematically conditioned by his captor to behold and bear witness to the atrocities that he commits in an abandoned slaughterhouse over the course of five years. The killer regularly brings captive women to his torture chamber where the boy learns how to eviscerate and slaughter innocents. Meanwhile, a beautiful young woman named Allison (Alexandra Daddario) comes to live with her uncle (played by Michael Biehn), who lives a mile or so away from the abandoned slaughterhouse. After the tragedy of losing her parents in a car crash, Allison tries to resume her life in a very small town, and she kindles a relationship with an emotionally damaged young man who lives around the corner. But what none of them can comprehend or prepare for is that a deranged killer and his surrogate “son” (who turns out to be a formidable killer himself) live just a stone’s throw away, and all of them are bound to collide sooner rather than later, resulting in a bloody confrontation that promises no happy endings.

A prequel to Stevan Mena’s nifty slasher Malevolence, Bereavement boasts a good cast with the knockout gorgeous Daddario headlining, and it one-ups its predecessor by having a stronger budget. Despite the cast and the budget, this entry is a relentlessly grim foray into the torture porn subgenre of horror, and it relies much more on revealing all mysteries and showing almost everything, which was exactly the opposite of what made Malevolence work. Malevolence was strange, cool, and left enough to your imagination that it was actually creepy, but Bereavement is a depressing prequel that doesn’t retain thrills, mystery, or the reliance upon the viewer’s imagination. Therefore, it’s a hard sell for me; it shows and tells way too much, and makes the viewer a victim because we already know how this story ends and there’s no way to avoid it. Still, Daddario is a stunning looking woman, and she spends the entire last act of the film in a braless shirt, and you’ll get no complaints from me about that. Followed by: Malevolence 3: Killer.

The newly reissued Blu-ray comes with a bunch of bonus features, including an audio commentary, deleted scenes, the director’s cut of the film, making-of features, and the trailer and stills.