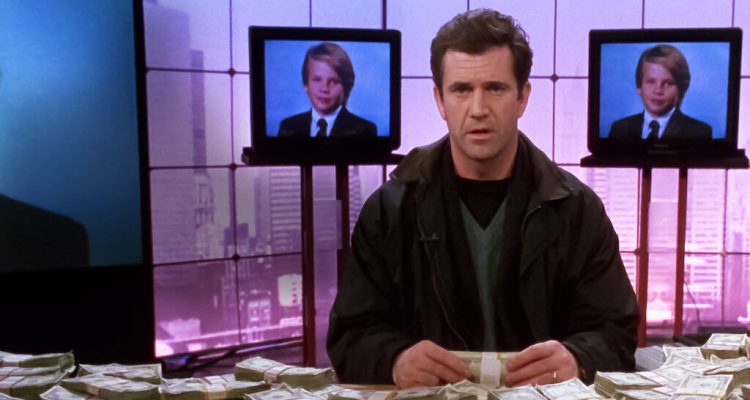 Ransom still holds up as a hugely entertaining thriller with Mel Gibson at his best and some nail biting tension.

Plot: Through a life of hard work, airline owner Tom Mullen (Mel Gibson) has amassed a great deal of wealth. When a group of criminals want a piece of his cash, they kidnap his son (Brawley Nolte) for a $2 million ransom. Encouraged by his wife (Rene Russo) and an FBI agent (Delroy Lindo), Tom prepares to pay the money, but the ransom drop goes awry. Enraged, Tom decides to turn the tables on the kidnappers by making the ransom a bounty on their heads — which he announces on national television.

Review: Here’s one that I remembered liking when I first watched it years ago but hadn’t seen since then. However, what caused me to want to revisit this was finding out that this is a remake which to be honest I didn’t realize until fairly recently.

Well, I can say without a doubt that Ransom holds up very well; not only does it boast a great cast who all give great performances in particularly Mel Gibson who I feel gives one of his best performances in portraying Tom Mullen, while somewhat sympathetic he does have a lot of flaws and Gary Sinise (who I’ve always found to be an underrated actor) brings a certain kind of menace to his intense role.

Ron Howard’s direction is superb bringing the right amount of tension and suspense throughout the film keeping the film at a tight pace.

James Horner’s score helps balance the tension and sets the mood throughout the film.

Overall, Ransom is a great thriller that utilizes its cast prominently moves at a steady pace and has a solid story that is well directed by Ron Howard.