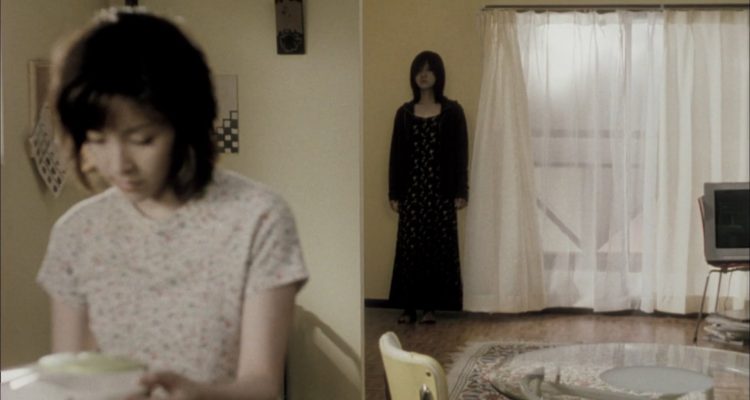 Spooky and unnerving if a little long; personally I prefer the remake.

Plot: Two groups of people discover evidence that suggests spirits may be trying to invade the human world through the Internet.

Review:A weird sense of dread covers this movie like a shadowy veil, and it will give you the spooks should you decide to go there. An epidemic of suicides and an illness of the soul envelops Japan over the period of a week or two, and once it gets going there’s really no turning back. Some college friends are all going through a scare coming through their computer screens: ghosts are living within the cyber world and once they’ve made their presence known to them all, the infection begins. The problem quickly becomes global: people are dying all over, and soon the streets are eerily vacant and there’s no escaping the certain doom. It ends with one of the characters escaping the plague by taking a boat into the great unknown.

Kiyoshi Kurosawa wrote and directed this metaphorical horror film that spends a lot of time asking questions about loneliness and abandonment and what happens after you die. It’s more quiet and strange than the Dimension remake, but I still prefer the remake. Fans of Japanese horror will give this a higher rating. Fans of apocalyptic cinema will probably enjoy the remake more.

Arrow Video’s brand new high definition Blu-ray / DVD combo pack release of Pulse is an attractive and alluring release for fans of the film and J-horror aficionados. In addition to a really nice looking package, the special features include “Broken Circuits: A new interview with director Kurosawa,” a new interview with the cinematographer, and “The Horror of Isolation: a new video appreciation featuring Adam Wingard and Simon Barrett.” Many other features include archival documentaries, trailers, and premier footage from the Cannes Film Festival.