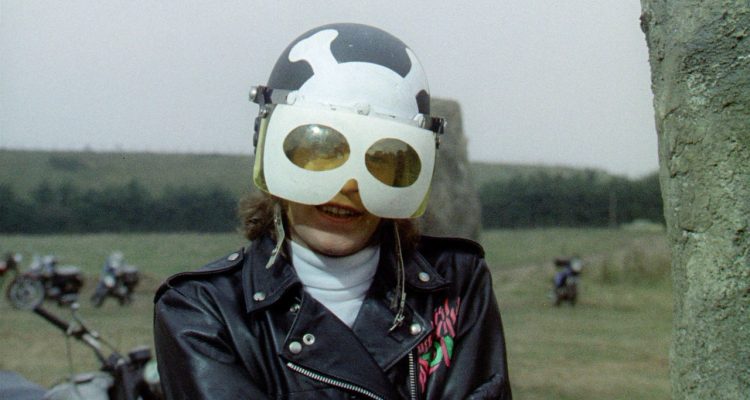 Psychomania is pretty forgettable but it’s an interesting oddity to at least watch once.

Plot: A gang of young people call themselves the Living Dead. They terrorize the population from their small town. After an agreement with the devil, if they kill themselves firmly believing in it, they will survive and gain eternal life. Following their leader, they commit suicide one after the other, but things don’t necessarily turn out as expected…

Review: Boy, those ’60s really did a number on the people who made Psychomania. It’s like a Hammer movie on acid … and on wheels! A biker gang whose sole purpose is to raise hell in a small English burb gets bored and complacent with their daily raids and roughhousing. Their leader is a suicidal son of a Satanist, and after finding a very rare breed of a toad in a cemetery one night, he brings it home to his mother, who allows him to perform a ritual and a deal with the devil himself that would insure his immortality … but he has to commit suicide first. He does so with eager aplomb, and comes back from the dead none the worse for wear, shocking his gang. He encourages them all to follow his lead, and they each off themselves in creative ways (my favorite was the guy who jumped out of an airplane without a parachute), and they each come back from the dead, leaving only one member (a young woman) left who refuses to kill herself. The gang puts pressure on her, but she resists, leading to an unusual confrontation at a Stonehenge-like site where the Living Dead turns into more decorative stones.

Ultra bizarre and destined to eternally be regarded as a midnight movie-type cult classic, Psychomania is a one of a kind. It’s goofy and sincere, but kind of fascinating (even to a fault), particularly for fans of biker movies and weird horror flicks with an emphasis on the occult. I liked the smoky atmosphere and acid trip imagery, but the movie doesn’t have much replay power or impact. It’s for cult film aficionados and on that front it’s a complete success. Director Don Sharp had done several Hammer films such as Kiss of the Vampire and Rasputin the Mad Monk.

Arrow Video has just released Psychomania onto a definitive 2K high definition Blu-ray, and it’s the ultimate edition this film will ever receive. It comes in a Blu-ray / DVD combo pack, with tons of special features, some of which are newly produced. If you’ve got the spare change in your budget to take a wild and crazy trip with these wacky bikers, have at it!