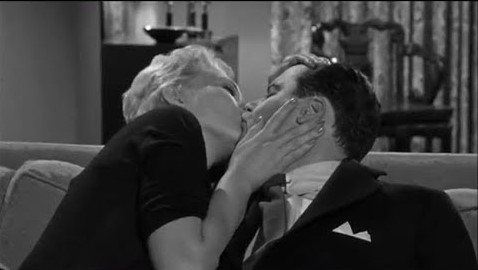 An average romantic comedy that is boosted by the charismatic performances of the two leads.

Plot: A couple (Judy Holliday and Jack Lemmon) divorce, only to find what a struggle it is to find their respective ideal mates.

Review: If anyone is wondering what the unusual title is referring to, Walter Winchell, the famed journalist, was known to use this term to describe failed Hollywood marriages. When announcing that two residents of Tinseltown were heading for divorce, he would say their marriage was “phffft.” It gives you an idea of how powerful Mr. Winchell was, that a movie could be named solely based on lingo he created. Unfortunately, nowadays, you mention the name “Walter Winchell” to a young person, and they probably think you’re asking about a specialized cocktail.

This movie was written by the same person who wrote Breakfast at Tiffany’s (which seems to be a famous story, but I never bothered watching the play or the movie), and if that story is as good as this story – then I didn’t miss much. This film has a very pedestrian story and is very predictable. As soon as the two leads divorce right at the beginning of the movie, you know they’re going to end up back in each other’s arms by the end; that’s not a spoiler; you literally could see it coming a mile away.  There are a few interesting bits (the two leads try to change aspects of themselves which is better than just staying the same, and Lemmon’s best friend going for Holliday was a bit out of nowhere). Still, generally, you’ve seen this type of movie a thousand times before – figuratively, not literally (unless you’re a rom-com fanatic).

It also isn’t that funny. There are some amusing bits (such as Lemmon drinking Holliday’s badly-made martini and chucking the remainder of the drink into the potted plant behind him), but no real “laugh-out-loud” moments. If you’re a fan of movies that give you belly laughs, this won’t be your cup of tea.

No, the only real reason to watch this movie is due to how charming both Judy Holliday and Jack Lemmon are. Again, the dialogue isn’t the best, but both performers are masterful at the art of comedic delivery and expressions and elevate this fare out of Mediocreland. Holliday is brilliant at the quick reaction change, going from hopeful to disappointed back to hopeful in the same breath. Lemmon is his usual awkward, confused self and seems overwhelmed by the illogic he faces in Holliday and Kim Novak’s characters. Between the pair of them (and yes, the supporting cast is fine as well), they make this movie watchable.

If you’re a Jack Lemmon aficionado, then you should probably watch this film. It’s only 88 minutes long and is light, fluffy entertainment that should not be taken too seriously. While today’s overly-sensitive moviegoers may take offence with the film (not that I know what they would take offence with, but then again, I never know what those folks are usually talking about), others who see movies as what they are, entertainment and nothing else, might get some enjoyment out of this flick.