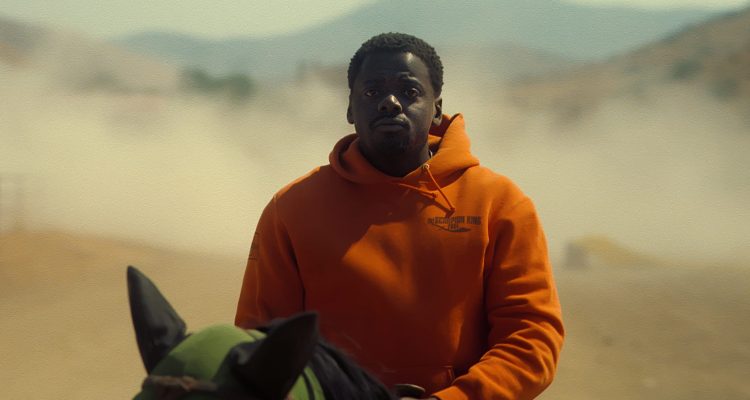 A solid film with great visuals, engaging performances, and an innovative monster, though it carries on too long.

Plot: Siblings OJ and Em (Daniel Kaluuya and Keke Palmer) discover a UFO in the skies by their father’s ranch.

Review: As far as Jordan Peele is concerned, I’ve really liked his first two films. I thought Get Out was a phenomenal and inventive horror movie, and Us was extremely intense, with a knockout performance by the always excellent Lupita Nyong’o. With that history in mind, I was really looking forward to Nope, especially with the trailers piquing my interest.

For the most part, I was not disappointed. Jordan Peele said that he wanted to bring spectacle to the audience and succeeded without a doubt. Nope is a visually arresting film, probably Jordan Peele’s best shot movie. The cinematography with the mountains and terrain in California is just great. Even though most of the movie is shot at night, it wasn’t to the point where I couldn’t see anything. That same commentary goes to the UFO that I have to say is undoubtedly unique – I’ve never seen anything like it.

As far as the story goes, it was alright. I wouldn’t say there were any surprises or twists like there were in either Get Out or Us that made me excited to see what would happen next. That being said, I could follow everything, and there wasn’t any point where I was ready to scream “Plot hole!” or something like that.

Where this movie disappointed was in the pacing. Clocking in at 131 minutes, I feel the film was too long and needed some trimming. You could start with the flashback parts to Jupe’s past as a child actor that weren’t really needed. I mean, yes, it did explain his motivation, but I didn’t need it – I could have figured it out on my own. People are saying that this movie is a slow burn-type story, and I get why they’re saying it, but there are slow parts that are still interesting, and there are slow parts that I’m kinda like, okay, let’s move on. It began to feel like that a bit in Nope, though I wouldn’t go as far to say I was bored with it.

The performances were quite good, with Kaluuya and Palmer standing out in particular. Kaluuya as the down-trodden and defeated OJ is almost unrecognizable in his flabby, slumped, slouched performance – it’s a clear mark of his ability to disappear into a role; his work here differs mightily from his other performances in fare such as Get Out and Black Panther. Keke Palmer brings a definite energy to Em that is a perfect counterpoint to Daniel Kaluuya’s dower demeanour. Brandon Perea is likeable as the film’s comic relief, and Michael Wincott brings his usual gruff, growly glowering to his role (though he definitely has a hilarious moment in the movie that cracked us up).

The soundtrack was typical for this sort of film. Lots of sharp noises when you were supposed to be surprised (it did get me once), and a relentless beat track near the end, which added effectively to the tension. Did I find this movie scary? No. But I did find the ending tense and was satisfied with the conclusion.

Overall, though, I did enjoy this film. I think it accomplished what Jordan Peele meant to achieve, the movie was certainly interesting, and enough was going on to keep me entertained. I just wish that more care had been taken with the pacing, as the story didn’t really support the runtime.