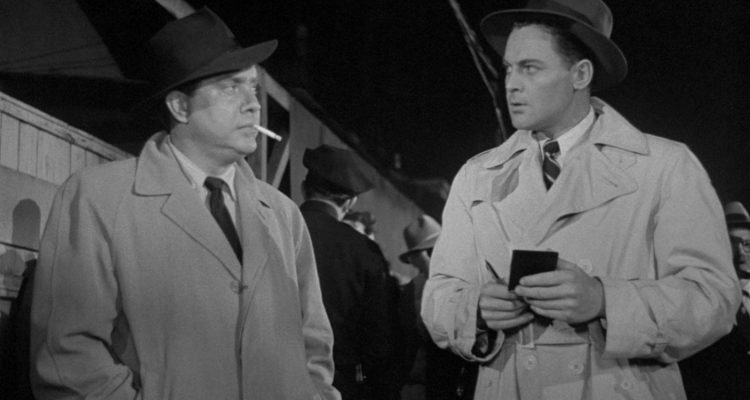 Noir Nites is a new section of the site I’ll be doing where we look back at classic noir films from the Golden Age of Hollywood; first up is the rare Shield for Murder starring Edmond O’Brien as a brutal police detective Lt. who murders a bookmaker’s runner for $25,000 in cash; a deaf mute sees him do it and now he finds he must kill again to cover his tracks.

The story to this movie is every bit as relevant today as it was back in 1954 as police corruption is arguably even worse now than it ever was. O’Brien is perfectly cast the thuggish cop Barney Nolan; he’s tired of struggling on a cop’s salary and wants to buy a nice house for himself and his girlfriend Marla (Patty Winters) but his methods go from bad to worse and you know he isn’t going to have a happy ending.

The script is razor sharp with some sparkling dialogue like “36 seconds… what kept you?” “I stopped for a round of golf” and many more. The performances still hold up too with O’Brien playing Barney as intimidating and someone who is out of control.  One scene has him pistol whipping two thugs and it’s a scene that could have easily been in a Scorsese movie (like Goodfellas). It’s funny how times have changed as the way some of the women are treated in these movies will shock some but it was a different era.

Shield For Murder has that noir style with lots of dark shadows, everyone smoking, corrupt cops and desirable dames; the best shot of the movie is after the climax with a shot of all the cops walking towards us with their guns and cool hats and it really should be a more iconic film than it is.

It’s a shame about several noticeable gaffes like in the opening scene you can clearly see the shadow of a boom mic which was rather glaring. Aside from that it’s well paced and with a short runtime of an hour and twenty minutes and it never lets up with Ed O’Brien proving an engaging (and intimidating) lead. If you like your old-fashioned crime dramas with no shortage of attitude then give Shield for Murder a try as it still holds up with a contemporary story that’s as relevant today.