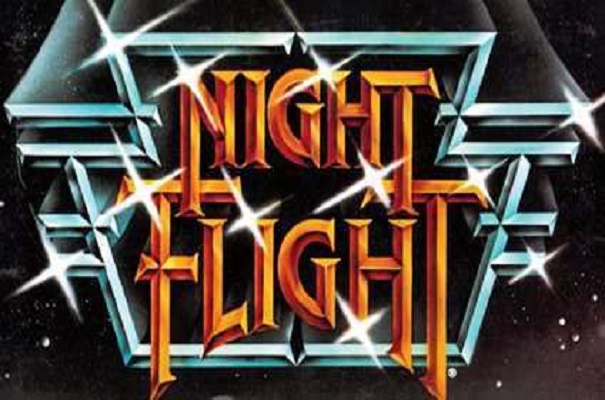 “Night Flight” is a cult classic TV series from the ‘80s returning to its cable roots on IFC. Running four-hour blocks of new material every Friday and Saturday nights 52 weeks a year it seemed an endless stream new music and pop counterculture.

You never knew what style of music was coming on in the next segment. Programming blocks might bring half an hour focused on one artist and his music videos accompanied by a smart and free-wheeling interview. Shapiro gave credit to his co-producer Stuart Samuels.

“That was the genius mind of connectivity. He’s a PHD in pop culture. He used to teach at the University of Penn. Ever since then Stuart (Samuels) and I have been working. We started “Night Flight” 35 years ago 1981 probably before a lot of you were born. It a testament that if you wait long enough some things come around again. I thank Independent Film Channel for bringing us back to cable after three decades. It’s strange because when we started Night Flight it was a four-hour show on Friday and a four-hour show on Saturday. In those days four hours was night enough time for me. I always wanted to work with more. I dreamed it could be longer than four hours a night because we had so much programming we wanted to do. Now we’re back on cable with a 15-minute show. I have to argue that one minute is already too long. What you have here is a sort of mash-up but is modern it keeps on moving.”

Or a show could feature an entire B-movie like “Reefer Madness,” “Andy Warhol’s Dracula,” “Kentucky Fried Movie,” “Medium Cool,” “The Terror of Tiny Town” or “Mister Rock and Roll.”

“Night Flight” made all-new episodes until Dec. 30 1988. The later syndicated versions featured an hour of condensed material such as five minutes of a David Bowie interview, an AC/DC live song, four minutes of new visual art from Gil Scott Herron or a punk song from the documentary feature “Salad Days: A Decade of Punk in Washington, D.C.”

A preview of the first eight 15-minute IFC episodes brought a trove of the best clips. Clips were separated by bumpers cartoons and educational films. We settle on a Merrie Melodies cartoon just long enough to be sure that “I did see a puddy cat.” A cheesy black & white movie stops just by long enough for a quick dialogue exchange. The woman says, “you great men always have to be so hard.” The man says, “well, I have to be hard.”

New York performance artist Lydia Lunch is seen in a clip from her video about crazy subculture in “Mondo New York.” Charlie Bernett performs jokes in the round at Washington Square Park
Freddy Krueger (Robert Englund in character) explains why Freddy thinks he is the hero of “A Nightmare on Elm Street.”
“Freddy’s got a legit beef. It feels so good to him this pursuit of revenge. This glee. That’s what the audience sees. Freddy purges a feeling we got on the freeway. It’s like James Cagney pushing that grapefruit into that woman’s face.  You also explore the same evil in your own soul,” Englund said.

A clip from the music documentary “All You Need is Love” (1975) features Keith Moon singing off-key.
A viewer who grew up on Night Flight, Ricky Henry, got his brand new spoof “Space Foxes” included.

“A lot of what has happened with Night Flight has always happened with Night Flight is a very organic process. People are attracted. It’s almost like a tribe in a way. When we first started to revive the show and bring it on Night Flight Plus people came out of the woodwork that were actual fans. Ricky Henry was a particular example. He is a producer at a TV station in Cincinnati. He reached out. Everybody that has come into the circle has been part of the dialect and the DNA. There’s a lot of legacy,” Shapiro said.

“Space Foxes” will be serialized in the IFC version of Night Flight, Shapiro said.

“Each episode will be five minute shorts that will tell a larger story, henry said. “You get five minutes at a time that ends on a cliffhanger,” Henry said. “We work together at the TV station in Cincinnati WKRC. It’s very much like the old 80s anime. If you have ever seen “Bubblegum Crisis” or “The Dirty Pair.” It’s my homage to that kind of stuff. They’re intergalactic space police. They wear outfits that no one would ever wear to do that kind of police work in. They try to take down a big boss. There is a big swerve and big twist ending. We’ve also got Daniel Pessina who played Johnny Cage in “Mortal Combat II.” It’s all on green screen it all looks like an old video game,” Henry said.
The “Night Flight” episode ends with an experimental documentary that must have motivated much about “Night Flight.” The D.A. Pennebaker film about the elevated Third Avenue Subway in New York City is from 1953 but “Daybreak Express” but is still catchy today.