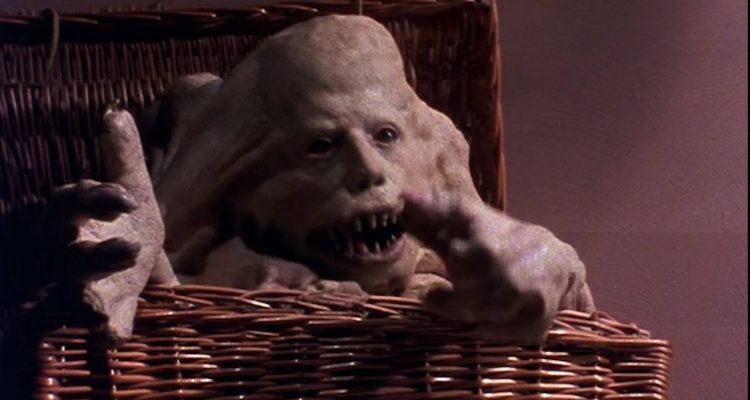 I’ve owned this film three times in different formats, and this is by far the richest release so far.

Plot: A young man carrying a big basket that contains his extremely deformed Siamese-twin brother seeks vengeance on the doctors who separated them against their will.

Review: The weirdoes are out in full force on the dark streets of New York. A guy named Duane (Kevin VanHentenryck) in his early 20s with a full mop of frilly hair, carrying nothing but a wicker basket has arrived … and he’s not alone. He checks into a dingy hotel with permanent residents (one of his neighbors is a hooker, another a sexual deviant, etc.), and it doesn’t take long for us to realize that Duane is carrying around his separated Siamese twin: a mutated imp with fangs and claws, but without legs or a fully formed body, just small enough to fit neatly into the basket, and just large enough to slay and devour a fully grown man. Duane and his brother Belial have a grisly story: They have a telepathic relationship and love each other, but their hateful, fearful father forced them to be separated by two veterinary doctors, who threw Belial in the garbage after the operation. Belial, who has a superhuman strength, survived and Duane has led them on a lifelong quest to find the doctors who separated them … and get revenge. As they prowl the streets of New York, looking for the doctors, they encounter all sorts of unexpected trouble as the curious folks in the hotel soon find out what Duane has in the basket!

A bona fide grindhouse horror classic, Frank Henenlotter’s Basket Case still holds up remarkably well for such a grimy, gross, and weird underground film. Weird never goes out of style, it seems. Henenlotter’s signature bizarre body horror sensibilities are on full display here, and he would go on to make the equally eye-popping films Brain Damage and Frankenhooker. Basket Case is pretty great, though, and it has more power and impact than the silly sequels that followed years later.

Arrow Video presents a new 4K transfer of Basket Case with a ton of bonus features, including everything and the kitchen sink like short films by Henenlotter, commentaries, archival features, trailers, and even a comic book that comes as an insert in the booklet. I’ve owned this film three times in different formats, and this is by far the richest release so far.