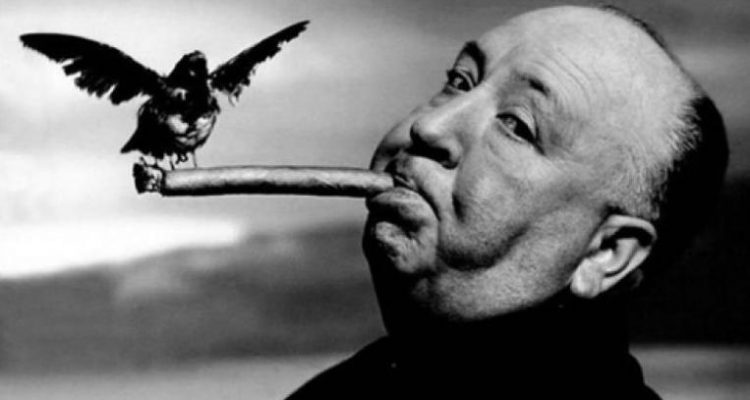 There’s been a lot of auteur film directors – De Mille, Tarantino, Truffault. Of them all though, one name stands out as one of the all-time greatest: Hitchcock, Alfred Hitchcock. The man has an impressive filmography that spans time both in England and the United States, but of all of his films, if I were to pick ten that you absolutely had to see, which ten would I pick? Read on…

Hitchcock’s first American film sees Joan Fontaine as the lead with Sir. Laurence Olivier playing her brooding husband. Brought to her husband’s enormous house nicknamed “Mandalay,” she soon finds herself attempting to unravel the mystery of Olivier’s first wife, Rebecca. One of the very best of Hitchcock’s mysteries, the audience quickly identifies and sides with Fontaine’s nameless lead, as the ominous presence of Rebecca is apparent throughout the film. Olivier is brilliant as De Winter, a man who walks the line between charming and sinister without crossing to either side. The real tour de force though is Judith Anderson as the fanatical housekeeper Ms. Danvers, who is the epitome of passive-aggressive, appearing threatening without raising her voice. This was Hitchcock’s only Best Picture-winning movie and one of the finest gothic mysteries ever made.

After a German U-Boat and an Allied ship sink each other, some of the survivors of the battle find themselves stranded at sea in the same lifeboat. The concept itself should be enough to make you want to watch the film. The mounting tension between the British, the Americans and the lone German occupant of the lifeboat mounts continuously throughout the film as both sides try to survive without trusting one another. The standout performance in this one is from Walter Slezak who plays the German. He’s both imminently likeable and sleazy enough to make you believe he could be capable of sabotaging his fellow passengers or he could just be a misunderstood and innocent man. Slezak was one of the great character actors of his generation, and his work in the film is exemplary.

Shot in one take (though there are a few cuts where the camera needed to be re-loaded), Rope is one of Hitchcock’s talkier films, taking place in one room and with a limited amount of characters. However, the film is worth watching, if not for the unique style of shooting, then for James Stewart’s brilliant performance. Playing a professor whose students have taken his teachings too far and done the unthinkable, Stewart’s mounting horror as he realizes what has happened and then the following cat-and-mouse game with the two antagonists is one of the greatest rivalries ever committed to film.

Only Hitchcock would remake his own movie and make it better. Probably one of his more fast-paced efforts, the Man Who Knew Too Much goes from Morroco to London with exciting chases, mystery, and suspense. Jimmy Stewart is great as the family patriarch who is given a clue by a dying man about an international plot, and he is the audience’s stalwart, as we follow him through the twists and the turns of the plot. Personally, I can’t stand Doris Day in her rom-com movies, but this was undoubtedly her best role, playing Stewart’s wife and belting out the classic song, “Que Sera, Sera.”

Perhaps Hitchcock’s best “action” movie, North By Northwest chronicles the adventures of Cary Grant playing Roger Thornhill (a Canadian executive, no less) as he is mistaken for another man (a common occurrence in a Hitchcock film) and kidnapped by sinister spies. Thrown unknowingly into the intrigue, Grant tries to unravel the mystery and discover the plot of the spies while using his usual charm and wit. The cornfield scene is especially memorable, and the performances of James Mason and Martin Landau as the villains are on point. It’s Grant who really shines in this film, bringing his sophisticated, yet relatable persona to the main role.

This film probably has one of the most intricate and brilliant murder plots ever devised. The first twenty minutes to half an hour is simply of a man walking another man through his plan of murdering his wife. Of course, it all goes awry, and then things get really interesting. Ray Milland is chilling as the scorned husband who seeks to murder his wife for money, and Grace Kelly is brilliant in her limited role of the housewife. The twists and turns in the movie are never-ending and keep the viewer on their toes and keeps them guessing all the way up to the end.

Have you ever had that one person in your life who would do better without? What if you met someone on a train who is in the same predicament and suggested you both kill the other person’s problem? Would you do it? That’s the premise for this gem, one of the best concepts in a Hitchcock film. Farley Granger plays the hero, though he’s an underwhelming wimp of a man – which actually makes him the perfect foil for Robert Walker’s insane villain.  As the movie continues, you realize just how crazy Walker’s character is, and you wonder if Granger has a hope in hell of surviving.

This movie has all the hallmarks of a great Hitchcock film – it’s mostly set in one location, and it features the main character slowly realizing the predicament they’re in. In this case, it’s James Stewart (yes, him again) as Jeff, a photographer with a broken leg. Spying on his neighbours with his camera out of boredom, he stumbles upon a possible murder. Becoming more and more paranoid about what he saw, Jeff soon involves his girlfriend (the ridiculously gorgeous Grace Kelly) and his trusty housekeeper (Thelma Ritter) to find out if Jeff is right or not. This one has one of the greatest endings in any Hitchcock film.

A boy and his mother. Probably Hitchcock’s most famous film, the movie introduced us to Anthony Perkins as Norman Bates, a shy and quiet man with a terrible secret. Janet Leigh plays Marion Crane who unknowingly happens across the Bates Motel and Norman, leading to probably the most famous murder scene ever shot. Brilliantly acted and paced, Psycho is a top-notch horror film with one of the greatest twist endings ever in a movie. There is no doubt why this one is a classic.

As brilliant as Psycho is, this movie, in my opinion, is the number one must-see Hitchcock film.  Shot in San Francisco, the story follows Scottie (James Stewart – what can I say, the man was an acting genius) who is given the assignment by a friend to follow his wife, Madeleine. Eventually, Madeleine and Scottie fall in love, but tragically, Madeleine commits suicide. The film is over, right? Wrong. What follows is probably the best character turn ever, and it’s handled masterfully by both Hitchcock and Stewart. What starts out as a nice little love story turns into a foray into obsession and madness which irreparably damages everyone involved and ultimately leads to one of the most tragic and haunting endings ever.