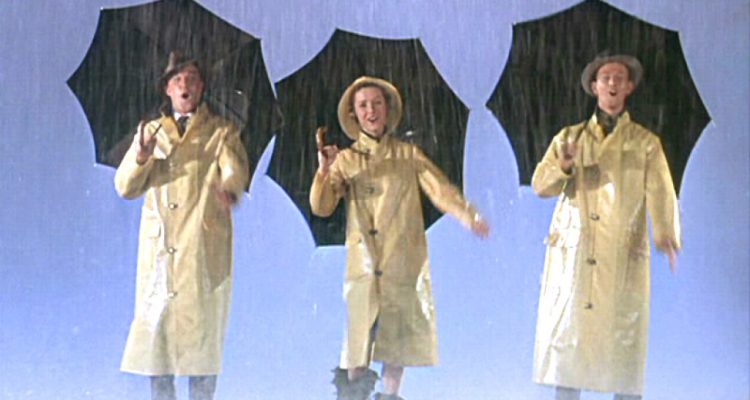 Having seen a lot of movies in my life, starting out with Beta as a kid where my father had 2,000 movies in his collection, then moving on to film class in university and learning about different film movements throughout history as well as watching movies from all different eras, eventually I have to ask the question to myself: what are my favourite movies? Well, here’s the list.  Please note that these are my favourites, not what I consider the best movies ever made. Maybe I’ll do that list someday, but right now, these are the favourites of all the movies I have seen.

Of all the genres in film, one of my favourite is the musical. I know that people make fun of these types of films, it’s unreal that people would just burst into song, right? Right. Except there’s also something sort of fun about it. Of all the musicals I’ve watched, this one is definitely my favourite. You’ve got Gene Kelly, probably the best musical star ever along with America’s sweetheart, Debbie Reynolds. The real treat though is Donald O’Connor – his “Make ‘Em Laugh” routine is surreal to watch and I’m not surprised he had to be hospitalized for exhaustion after they finally shot the sequence. I’m also a big fan of the story – I love stories about Old Hollywood and this one is particularly interesting to me as it deals with the struggles and uncertainty felt by silent actors transitioning into the sound era. A beautiful, emotional film that hits all the right buttons, with catchy music and brilliant dance choreography.

Along with musicals, I love the Western genre. There’s something to be said about heroes who are stripped of all modern conveniences and live by a simple code of ethics. This movie is vastly underrated and boasts one of the best casts for a film ever (including Scott Glenn, Kevin Kline, Kevin Costner, Danny Glover, Brian Dennehy, Linda Hunt, Roseanna Arquette, Jeff Fahey, Jeff Goldblum and John Cleese), I love the different personalities of the four leads and the different challenges they each face (Kline’s past, the racism aimed at Glover, Glenn’s injury, Costner’s youthful exuberance) and I love how each of them goes off at the end to face their rivals head-on.

Alfred Hitchcock is my favourite director of all time, so I had to put one of his films in here. While it would be easy to just go with Psycho, my favourite of Hitch’s masterpieces is Vertigo. James Stewart is beyond brilliant as a man obsessed with a dead woman he never met and Kim Novak gives a heart-breaking performance as a woman who would give up her own identity just to be loved. This movie is subtly creepy and as it moves along, I find myself unable to shake the dread and foreboding as the film chugs along to its unnerving conclusion. One of the best examples where you start out totally sympathizing with the protagonist, only to discover the darkness that can exist in even the most altruistic souls.

This movie is a textbook example of how to make a successful film. The killer is an icon and spawned dozens of imitators, the heroine is relatable, the suspense is relentless and the music score is probably the best ever committed to film. Add in Donald Pleasance whose character paints a mythical picture of a silent murderer in eloquent speeches about the nature of true evil and a handful of memorable scenes shot to perfection and you have yourself a legend.

While I acknowledge Christopher Nolan’s trilogy as being a good, maybe great series, my favourite Batman film is still the 1989 film. You could say it’s partly nostalgia – I remember the marketing campaign for the film where basically every item you can think of had a Batman logo attached to it for the summer blockbuster release of the film. Watching it again (and again) years later, I appreciate Keaton’s understated portrayal of the duo roles of Batman and Bruce Wayne and while I acknowledge what Heath Ledger did the Joker role, Jack Nicholson is still my favourite Joker, the perfect blend of comedy and psychosis who doesn’t think twice about shooting his own men or gassing an entire city. With a terrific score by Danny Elfman and a great supporting cast, there hasn’t been a superhero movie made yet that trumps this one.

This movie was my first DVD, the inspiration for the first email address I ever used and one of the first posters I ever bought. To me, it is the be all and end all of mystery films, an expertly crafted tale that ensnares the viewer in its clutches and doesn’t let go.  Acted out by one of the best cast of character actors ever assembled (including Kevin Spacey, Chazz Palminteri, Gabriel Byrne, Kevin Pollack, Benecio Del Toro, Pete Postlewaite, Stephen Baldwin, Giancarlo Esposito, Dan Hedaya and Peter Greene), with a memorable score and relentless pacing, you follow the story of five thieves who get entangled with a mythological crime figure. The greatest trick the Devil ever pulled may have been the convincing the world that he didn’t exist, but the greatest trick that this movie pulled is bringing the viewer back, again and again.

Growing up, I loved the Universal Monsters. I don’t know why, maybe I was just a really morbid kid, but I always thought they were cool. I would read books on them and as soon as they were released on DVD, I snapped them all up and watched them again and again. Add in Abbott and Costello, probably my favourite comedy team of all time (I own and have seen all of their movies) and you have movie magic. Bringing back Lugosi and Chaney Jr. to reprise their legendary roles was genius (I would have liked Karloff to return too, but Glenn Strange was an adequate replacement), this film features some classic scenes, from our heroes bringing real monsters to a wax museum to Costello debating whether to take an orange while the Wolfman is poised to strike, to their encounter with the Invisible Man (voiced by Vincent Price) at the end of the movie, this film has it all.

I could really put any of the original Star Wars films in here, but I have to choose this one as my favourite of the original Star Wars trilogy. I remember my Dad taking me out of school to go downtown to see this movie.  I was five at the time and we went to one of those old theatres with a balcony. Walking inside past the replica of Han Solo frozen in carbonite, I watched the conclusion to one of the greatest tales ever told. Seeing Jabba the Hutt finally, watching the daring escape from Tattoine, Yoda’s sad yet poignant passing, the battle on Endor and finally the gigantic climax with the rebels facing down the evil Empire on three different fronts…I get goosebumps just writing this. A perfect ending to the most perfect trilogy ever made.

Much like the last entry, I could easily slide Temple of Doom or Last Crusade in here, but as a four year-old, sitting in the front row and watching Indiana Jones contend with Nazi’s, snakes, a giant boulder, and the Ark of the Covenant…it doesn’t get better than that. Taking inspiration from old adventure serials, this is just a good old-fashioned story that is satisfying on all fronts. With John Williams’ legendary score playing, we jump from locale to locale, with a vulnerable hero who still overcomes his fears and manages to save the day. Plus, probably one of the most shocking endings that didn’t pull any punches and possible scarred me for life.

This was a movie I didn’t even want to watch as a kid, but my Mom forced me. Sitting down to watch it, time seemed to stop as I began engrossed in one of the greatest debates I’ve ever seen, as a southern schoolteacher was imprisoned for teaching Darwin’s Theory of Evolution in a decidedly religious small-town. This lead to two film titans, Spencer Tracy and Frederic March to thunder at each other from opposite sides of the debate as the defense and prosecuting attorneys, respectively. Gene Kelly does a masterful job as a reporter who provides relief from all the heavy thought in the film with his smarmy and cynical observations of the action. However, the film soon evolves from a conversation about religion vs. science to the real message of the film – the individual’s right to freedom of thought. Masterfully shot by filmmaker Stanley Kramer, I find on most days, more often than not, my mind drifting back to the bevy of memorable lines and exchanges scattered throughout the film and whether we’re talking about office exchanges or debates on the Internet, the fundamental message of this film is relevant today more than ever.