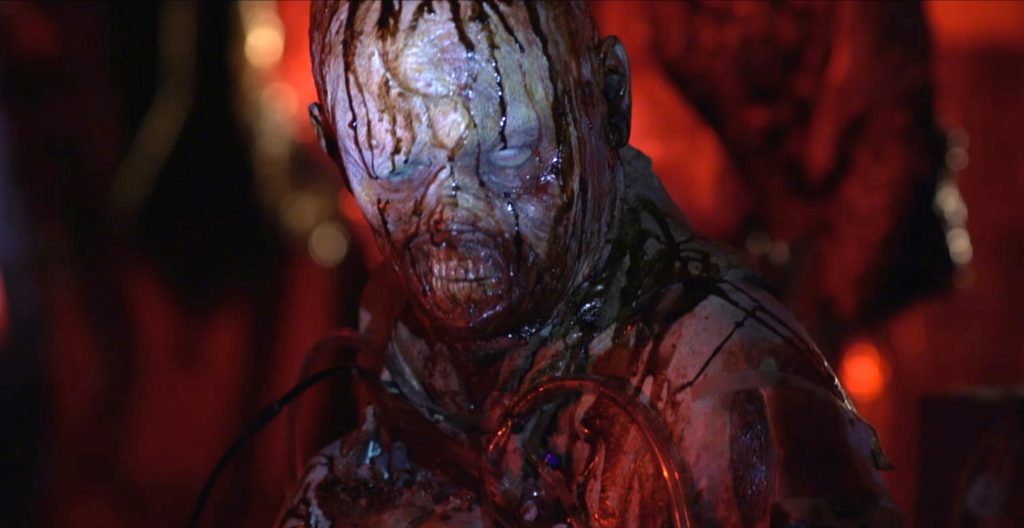 The Void is destined to become a modern horror classic as it has enough weirdness and buckets of blood to keep avid fans entertained.

Plot: Shortly after delivering a patient to an understaffed hospital, a police officer experiences strange and violent occurrences seemingly linked to a group of mysterious hooded figures.

Review: I’ve heard a lot of good things about The Void so I’d been anxious to check it out ASAP; I finally sat down to watch it the other night and it’s one of those rare movies that is worth the hype. It’s a mixture of Hellraiser 2 and John Carpenter’s The Thing so you can expect plenty of blood and gore with a side order of weirdness.

Although it’s not particularly terrifying in terms of jump scares it still manages to be creepy and quite disturbing in parts; the mysterious robed figures are the scariest aspect as we know nothing about them so that just adds to their menace.

The Void is quite surreal too with some bizarre (but stunning) visuals that stick with you long after watching; the camera work was particularly impressive too making the hospital corridors appear endless and just upping the fear factor nicely.

The characters are quite typical for the horror genre where most of the obnoxious ones are disposed of in suitably violent fashion but there were a few surprises in terms of who survives and who doesn’t.

It was great to see Windom Earle from Twin Peaks (Kenneth Welsh) in such a pivotal role as he’s one of my favourite actors but I also liked Aaron Poole as our lead Daniel Carter. He and his wife are trying to get over the death of their child, which ends up being the least of their worries. As the film goes on, they are attacked by hideous creatures, which have suddenly appeared in the hospital they are now trapped in. When his wife is taken it’s up to Daniel and a few survivors to go into the bowels of the hospital and rescue his wife from a fate worse than death.

The practical creature effects are fantastic and take us back to the glory days of horror so there is refreshingly no CG to speak of (that I noticed anyway).

The music is quite John Carpenter-ish in parts and really helps to build an atmosphere of dread without every being overly intrusive.

It’s very well paced and at only 90 minutes it moves at a brisk pace and you won’t be bored for a second.

Overall, The Void is destined to become a modern horror classic as it has enough weirdness and buckets of blood to keep avid fans entertained. Jeremy Gillespie and Steven Kostanski are directors to watch for sure…