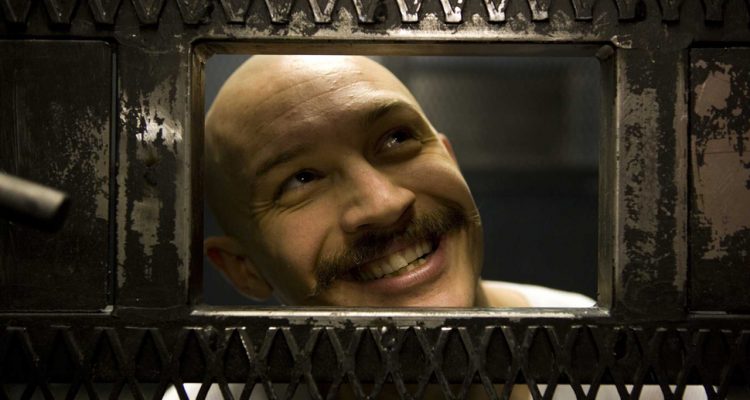 Bronson isn’t an easy watch but it’s electrifying and won’t let you take your eyes off the screen for a moment with Hardy giving his all to make Bronson his most memorable character to date.

Plot: A young man who was sentenced to seven years in prison for robbing a post office ends up spending three decades in solitary confinement. During this time, his own personality is supplanted by his alter-ego, Charles Bronson.

Hardy has never been better and is utterly terrifying as the unhinged monster Michael Peterson; a man who just doesn’t know how to live in the real world and is only happy when he’s in prison fighting with everyone.

He’s not exactly someone you’re going to root for as he’s basically just a crazy dickhead but the movie is a 90 minute trip into insanity as we watch Bronson/Peterson punch his way through practically every prison in England. It’s an interesting dynamic because the protagonist is really the antagonist which also means there is no real narrative structure. It’s really just him going through different prisons and fighting… and not much else.

As this is directed by Nicholas Winding Refn then you expect weirdness and Bronson delivers in spades with some surreal visuals and operatic music which really accentuates Bronson’s craziness. It’s funny how he was certified “sane” as this is not someone who comes across that way and he should probably be locked away in a deep, dark hole for the rest of his days… which he would probably enjoy anyway.

It’s incredibly well paced and Hardy is magnetic as Bronson who takes us on a wild ride as we really explore his mind and try to glimpse what kind of man he really is underneath it all. We discover that he has artistic tendencies and yet if even they turn into acts of violence; it’s like he just can’t help himself and he just gets off on conflict and violence.

Overall, Bronson isn’t an easy watch but it’s electrifying and won’t let you take your eyes off the screen for a moment with Hardy giving his all to make Bronson his most memorable character to date.