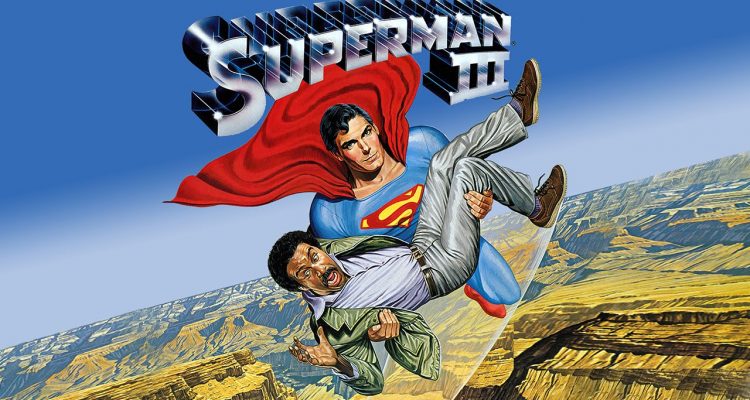 When we talk about Superman movies, the majority of people will tend to have the same opinion: one and two are the best and the rest of garbage. While I don’t agree with everyone’s assertions that the latest incarnation of Superman in the DC movies is substandard, I have no love for Superman Returns and Superman IV left much to be desired.  Superman III, though…can’t say that I agree with that at all.  In fact, it’s my favourite Superman movie! Not the best one, mind you – I still believe part 2 is the best overall movie. However, if you want to know which one I would pick to watch if I could only pick one, it would have to be part III and not just because it was the first Superman movie I saw in the theatre (though that may be part of it). Nope, here are the reasons why Superman III is my favourite Superman movie.

Let’s start with the obvious – Dark Superman is great. Spawned by the weird kryptonite that Gus Gorman gives him, Dark Superman has no problem with being a bad guy. Not saving people, causing oil spills, sleeping with dumb blondes –Dark Superman does it all! He’ll even hang out in bars and flick peanuts at the glasses, before warping the mirror behind the bar with his head vision! You know a scene is legendary when another show (Supergirl) pays homage by re-creating the scene – after all, imitation is the sincerest form of flattery. The best scene with Dark Superman though, has to be his fight with Clark Kent in the car junkyard. As a viewer, you’re terrified for Kent – he’s not Superman. In fact, you’re not even sure if he has Superman’s powers! It’s weird, but you almost kind of expect him to be powerless – because he’s Clark Kent, mild-mannered reporter, not Superman. When he triumphs and becomes good again, you want to cheer because you feel like something was accomplished, the hero triumphed over impossible odds and came back, better than ever.  You can’t have that without Dark Superman.

Okay, okay, I know – Richard Pryor has no business being in a Superman movie…and I get it. I really do. Richard Pryor was a comedian and Superman should not be a comedy.  I generally agree with that assessment – but c’mon, it’s Richard Pryor! The man is a comic genius…and he’s genius in this movie!  For instance, the part where he’s pretending to be an army general and he crashes the ceremony for Superman to give him the phony kryptonite – he does this big speech before giving the kryptonite to Supes and it is just, comedy gold. You literally have no idea what he’s talking about, but he’s so passionate and amped up to spew his nonsense that he breaks his stick! Then there’s his plan to rip off his company by taking all the loose change off everyone’s check and put it into his! Genius! That plan was so great, Office Space used it for their movie (remember what I said about imitation?). In general, Gus is hapless, but it’s not stupid hapless, he’s doing things, he’s just in way over his head. His plan to get Clark Kent’s old school rival drunk and to steal the keys to break into a computer is priceless, but finding out both keys have to be inserted at the same time, he improvises a solution that is both hilarious and inspired. When he turns good at the end of the movie, you’re cheering because you know Gus wasn’t evil, just misguided. Pryor takes a character that could be a one-dimensional buffoon and gives him a working-man vibe that elevates the role more than you have any right to expect.

We move on to the true villain of the movie – Ross Webster. A megalomaniac millionaire businessman, he is the true embodiment of the 80’s yuppie culture, a me-first spoiled brat who felt his word was law. Dissatisfied that he is only a multi-millionaire, he wants to take over the world’s supply of coffee and oil and isn’t above creating a natural disaster to achieve his aims. Played brilliantly by the cool and calculating Robert Vaughn, Webster is seemingly missing scruples or a conscience and tries to murder Superman on numerous occasions. When Dark Superman is inadvertently created, Webster pounces on the opportunity to stop an oil ship and cause untold damage to the environment, all in the name of making a fast buck. His approach is summed up in a conversation with Gus Gorman where he utters the line “it’s not enough for me to succeed, everyone else must fail.”  A great line for a great villain. You would think that only be a human being would make him a substandard nemesis for Superman, but Webster possess the one thing that none of Superman’s other villains had to this point – money. With it, he turned Superman evil, created a super-computer that almost murdered the Man of Steel and still caused countless deaths just because of sheer greed.  Still sound substandard to you?

Now let’s move on to the love interest in this story. In the first two movies, the female lead was Lois Lane. I was never a big fan of Lois Lane in the Superman films – she seemed to be the classic popular girl who fell for the jock with the big muscles. It’s easy to go for Superman, he’s after all…Superman, but it says something else about the girl who takes a shine to awkward, sensitive, Clark Kent. That girl is Lana Lang. Throughout the movie, it is obvious that she’s a fan of Superman, mostly because her son Ricky is a fan of Superman. It’s Clark Kent who she falls in love with and at the end of the movie, it’s her that Clark Kent gives a ring to, not Lois Lane. For two movies at this point, we’ve seen the girl pine for Superman, who is the obvious choice for the female lead to fall in love with, without poor old Clark Kent being appreciated for all the great stuff he does. It’s a breath of fresh air that a beautiful woman could find an attraction in the sweet, yet clumsy farmboy from Smallville, as opposed to chasing the impossible dream that is Superman.

Let’s be honest though, this is all well and good, but a movie really is summed up by the number of great scenes it has and for scenes to be great, you have to remember them. How many movies have we liked over the years, and yet we can’t remember a damn thing from them? You don’t get that with Superman III though, it’s jam packed with memorable scenes. You have the opener, which was a first for a Superman movie, playing more like one of those long silent comedy scenes, rather than the usual big John Williams flourish with white credits across space (though not using the John Williams score was a miss in this film). It tells you that you’re not going to see the same old, same old and you aren’t. Then there’s the big scene where Superman saves the chemical plant by freezing up the lake and dropping it on the buildings. It’s a tense, well-paced scene with some truly great stakes. Ricky bowling and Clark Kent sneezing, blowing the ball with such force that it crushes the pins. A great moment that momentarily shuts up blowhard Brad Wilson. Ricky almost crushed by a thresher, only for Superman to save him. A great moment where a hero saves one of his fans. Dark Superman blowing out the Olympic flame and straightening the Leaning Tower of Pisa. Great scenes that are both entertaining and showing Superman’s growing destructive side. The attack at the end by the super-computer, including shooting rockets at Superman like a video game and the creation of a murderous android that almost kills both villains and hero alike. Superman saving the day again, though obviously pushed to his limits at the end. There are so many great scenes from that movie that resonate with the viewer and stick with them, moments that make you smile and make you laugh and hold you on the edge of your seat. At the end of the day, this movie was made for entertainment and if it succeeds, then it cannot be considered a failure, right?

I never said Superman III was a perfect movie. Yeah, some of the jokes are telegraphed, there’s hardly any Lois Lane, Perry White or Jimmy Olsen, there’s no superpowered villain to fight and John Williams’ sublime score isn’t used as well as it could be. However, if you just want a great time with some entertaining characters, if you want to see Superman a different light than he has ever been portrayed before (or really since) and if you want a really well-told tale of the continuous struggle between good and evil, than this movie is for you. Many Superman tales have come before and even more will come after, but for me, this is the one I will always return to when I want to watch some Superman.