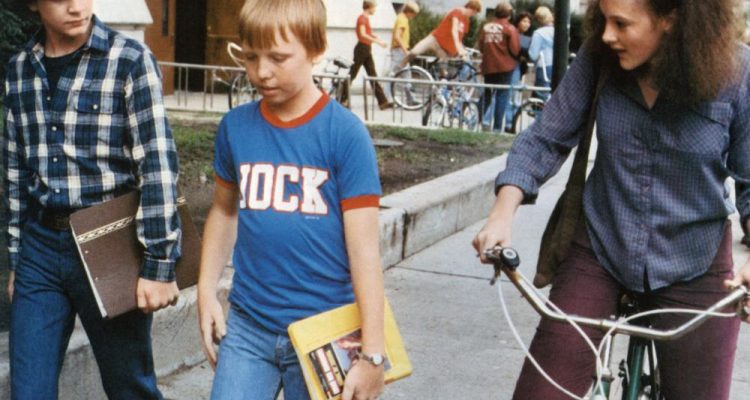 A classic which will have you cheering; still a relevant story which is 100% satisfying. The Blu-ray is nicely remastered.

Plot: When a boy comes to a new school and gets harassed by a bully, he acquires the services of the school’s most feared kid as a bodyguard.

Review: One of the quintessential growing up movies of the early 1980’s, Tony Bill’s My Bodyguard casts gangly young Chris Makepeace (later in Vamp) as misfit sophomore in high school Clifford Peach, who is immediately targeted by school bully and all around bottom-of-the-barrel scuzz Melvin Moody (Matt Dillon) and his cronies. After he’s all but pummeled on his first day of school, Peach must reevaluate his stance and come up with a plan, and so he goes to an unlikely source for help: a hulking outcast named Linderman (Adam Baldwin in his first role), who’s an even bigger misfit than he is. Linderman is a walking urban legend at his school, and he doesn’t have any friends, but when he saves Peach after a bully attack, Peach implores the bigger kid to help him out by being his bodyguard on campus so that Moody and his imps will leave him alone. It works at first, with all of the underdogs flocking around Linderman (who’s a likable loser with a tragic secret), but then Moody hires an even bigger and badder bodyguard to stomp on Linderman and humiliate him in front of everyone. With Peach on the verge of loosing his best friend after gaining his confidence, he’ll have to reach deep to reconnect with Linderman’s humanity in order to bring him back to the fold. But first, Peach will have to face Moody on his own in an all-out brawl that will have you cheering.

The all-time great anti-bullying movie, My Bodyguard couldn’t be made the same way today in our jaded, dangerous world, but it stands as a near-perfect treatise on friendship, trust, and fighting back. Makepeace is charming in his role, and though Baldwin has some difficulties in the more melodramatic scenes (it’s not really his fault; the scenes are written a little awkwardly), his character emerges a truly remarkable hero with real dimension. A nice score by Dave Grusin gives the movie a sweet flavor, and thank goodness the soundtrack didn’t have a single period song of the era. In that sense, the movie almost feels timeless. Written by Alan Ormsby.

Kino Lorber has just released a high definition Blu-ray of My Bodyguard, and it’s a really nice upgrade from the old Fox DVD from over a decade ago. This is one of those films you absolutely have to have in your Blu-ray collection, so if you’ve never seen it before or missed out on the Fox DVD, then this is the perfect time to make your move.