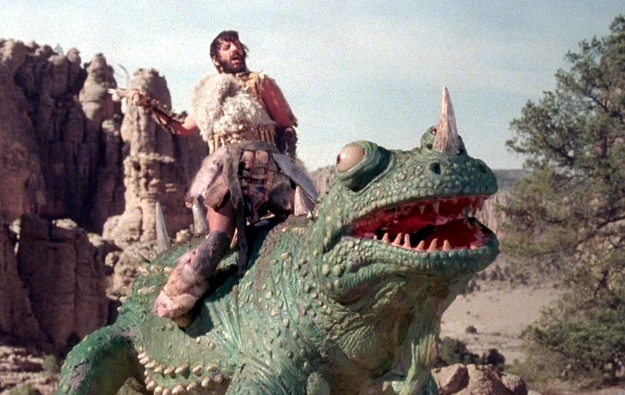 Nicely remastered and the film is entertaining and funny.

Plot: Atouk (Ringo Starr) is the leader of a small band of misfit cavemen who are part of a larger community headed by strongman Tonda (John Matuszak). Atouk is madly in love with Tonda’s woman, Lana (Barbara Bach). He even ignores the advances of the lovely Tala (Shelley Long) and sets his mind to finding some way of wooing Lana. During Atouk’s quest for romance, he and his cohorts fend off dinosaurs, indulge in hallucinogens and invent cooking, music and medicine.

Review: In 1981, two notable – and very contrasting – caveman movies were released in theaters: Quest for Fire and Caveman. Quest for Fire is probably the greatest – if not the greatest caveman movie ever made, and Caveman is probably the funniest caveman movie ever made. So there you go. Caveman feels like a National Lampoon movie and, funny enough, many years later, Adam Rifkin would make a caveman movie called National Lampoon’s Homo Erectus (a.k.a. National Lampoon’s Stoned Age), which resembles Caveman in a lot of ways. Ringo Starr of The Beatles stars as a slightly too smart for his tribe caveman named Atouk, the guinea pig of his clan. They make him eat the questionable berries first, and he doesn’t have a mate, although he wishes he had the lovely Lana (Barbara Bach, Starr’s real wife), who belongs to Tonda (John Matuszak, who played Sloth in The Goonies), the clan hulk. After a botched attempt to woo Lana, Atouk is thrown out of the clan and he wanders around with his buddy Lar (Dennis Quaid) until they come across some other cavepeople who desperately need a leader. When Atouk accidentally discovers fire, his clan has the edge over Tonda’s clan, but it doesn’t matter because they’re attacked by hungry dinosaurs, snow monsters, and flying creatures, which puts them all at risk. Will Atouk be able to conquer Tonda and tame the dinosaurs and harness the power of fire, or will he look like a complete idiot in front of both clans?

Funny without being stupid, and really clever without using any English dialogue (or subtitles), Caveman manages to be delightfully amusing and moronic in the best possible way. Composer Lalo Schifrin conjured up a fun music score that is at times incorporated into the action (the cavemen discover music for the first time, among other things), and writers Rudy De Luca and Carl Gottlieb (who also directed) seem to have a good time coming up with dopey things for Starr and the rest of the cast to do. Everyone appeared to be game for the shenanigans.

Olive Films recently released a nice looking Blu-ray edition of Caveman, and it exceeds the old MGM DVD release from over a decade ago. Though there aren’t any special features on the disc, the cover artwork is enough of a selling point, as it boasts the original theatrical artwork instead of that terrible artwork MGM put on their sleeve. Affordably priced to own, Caveman is a solid release.