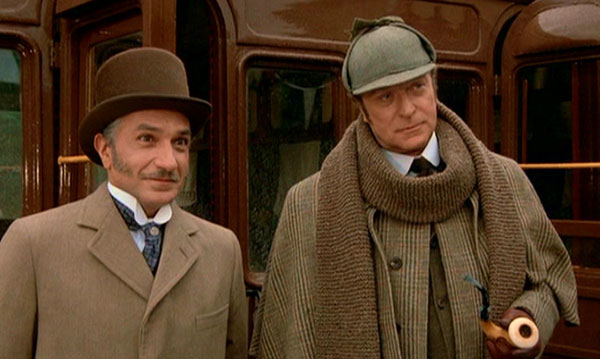 The film is a lot of fun with a sharp script and still feels like Sherlock Holmes.

Plot: Legendary detective Sherlock Holmes and the inimitable Dr. Watson (or is it the other way around?) are at the center of this comic spoof that stars Academy Award®-winning actors Michael Caine (Best Supporting Actor, Hannah and Her Sisters) and Ben Kingsley (Best Actor, Gandhi).

Dr. John Watson (Kingsley) has fooled the world. He’s created a work of fiction in the figure of the crime-solving sleuth, Sherlock Holmes, when it is he himself who has set about solving crimes. With the public demanding to see the legendary Holmes in the flesh, and to keep the charade in play, Watson hires out-of-work actor Reginald Kincaid (Caine) to assume the role with very mixed, and very funny, results.

The game’s afoot with Watson and the unlikely Holmes hot on the trail of Professor Moriarty (Paul Freeman, Raiders of The Lost Ark), the nefarious mastermind behind a plot that could topple the British Empire.

Review: You know how the Sherlock Holmes stories go: Sherlock is the super sleuth, can’t-touch-this genius with unparalleled skills in solving crimes, and his sidekick is the ever-dependable Dr. Watson. Well, if you’ve never seen Thom Eberhardt’s delightful comedy/mystery Without a Clue, then you’re in for a nice change of pace. Holmes (played by Michael Caine in a wonderful performance) is a bumbling, inherently inept actor, who was discovered by Dr. John Watson (played by an equally stellar Ben Kingsley), who created the Holmes character in a series of stories that have captured the public’s imagination and fancy. Holmes is fairly worthless as a detective (but he’s great at pretending), but Watson is the genius, and so when Scotland Yard comes calling on Holmes to help save the kingdom from the dastardly Moriarty (played by Paul Freeman from Raiders of the Lost Ark), who has stolen the Queen’s property (some money templates) and plans on using the counterfeit money to build an army, it’s up to Watson (through Holmes’ acting) to solve the crime of the century.

Perfectly in tune to the heart, soul, and spirit (and good old fashioned fun) with all of the great Sherlock Holmes stories from Sir Arthur Conan Doyle, Without a Clue is an unheralded sleeper classic that the whole family can enjoy. It’s even got some action in it, courtesy of Caine and Freeman, who have an epic sword fight at the climax. If you’ve ever wanted to see Caine play Holmes, he does a great job at it, and his take is hilarious. With a nice score by Henry Mancini, and a clever script by Gary Murphy and Larry Strawther, Without a Clue is pretty fantastic.

Olive Films recently released a superb looking Blu-ray of Without a Clue. It always vexed me that the MGM disc was full frame, but Olive’s release restores the film in its original 1:66:1 aspect ratio, and the transfer is nice and clear. There aren’t any special features on the disc, but Olive’s release boasts the original theatrical artwork on its cover, which is a plus.