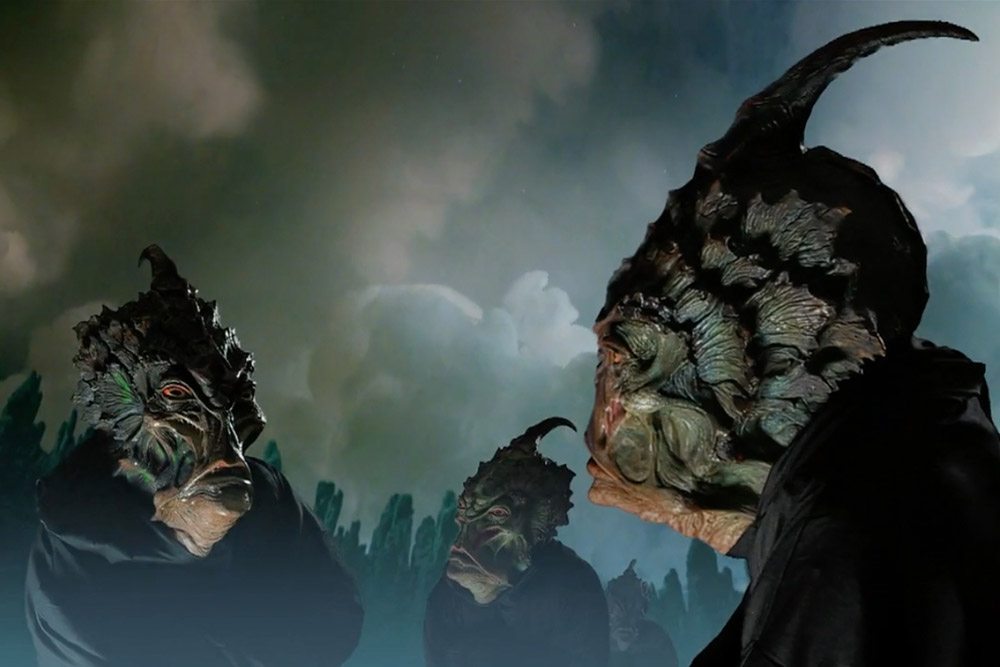 Monsterland really has no connective tissue, and its themes are all over the place.

Plot: Welcome to Monsterland! A terrifying place where savage beasts, carnivorous creatures, and grotesque abominations are the new normal, and the human race is now at the bottom of the food chain.

Review: Monsterland starts off the exact same way John Carpenter’s In the Mouth of Madness ends: the monster apocalypse is in full swing, and a guy casually walks into a movie theater newly refurbished with human carnage, and he grabs a tub of popcorn just before settling into a seat smack in the middle of the auditorium and watches the show. What he ends up watching is … a series of short films! Each short film documents (I assume) what’s going on out there in the apocalyptic world, either just before everything went bonkers, or just after the monsters took over. One film (one of the simpler ones) has some friends going skinny dipping in a lake one night, only to find that there’s a man swallowing creature that eats them all up real good. Another film (entitled The Grey Matter) shows us a poor sap whose brain fell out of his head, and he’s got a gaping whole where his brain should be. He goes to work (he’s basically dead, but no one told him so), and by some miracle he charms the cutest girl in the office and they have a date, but not even realizing he’s some kind of zombie, the date goes a little sideways. Another short film called Hellyfish shows us the world being devoured by jellyfish (it all starts when a kid on the beach puts a firecracker in a jellyfish), and other short films are animated (I love the one with the puppets!). The entire series of short films is wrapped around by the original one where the guy is watching the whole thing on a movie screen, and even he has his own monster to face off with.

From the distributor and producers of another series of completely unrelated short films called Zombieworld, Monsterland really has no connective tissue, and its themes are all over the place. There’s no underlying narrative to speak of, and while it covers its bases with short stories of vampires, zombies, giant monsters, and other crazy, unnamable things, it never gels as a project. Still, some of the shorts are bound to work extremely well for certain viewers, so there’s definitely something to recommend here.