Private Obsession is the stronger of the pair, while Midnight Confessions is the clear loser.

Review:
A late night talk radio host named Vanessa (Carol Hoyt) entices her listeners with sexy stories and teases, and she welcomes callers to share their sex woes and ultimate fantasies. A serial killer is also stalking her and killing prostitutes almost on a daily basis, and he might be a regular caller as well, which brings a weary detective (played by Richard Lynch) knocking on her door for some questions. The detective has some vague leads from skittish hookers who believe they’ve spent time in the killer’s company, but every lead seems to contradict the one that came before; is the guy a fetishist who gets off on masturbating for hours in front of naked hookers, or is he living a regular life, under the guise of someone seemingly normal without any red flags? The answer is really no surprise: He’s a twin with severe mother issues, and he makes regular visits to his brother who’s been incarcerated for killing their mother decades ago for being a “whore.” When Vanessa begins a casual sexual relationship with her new hire, a vaguely handsome tech worker (David Milbern) in the office, she realizes that she’s in the crosshairs of a psycho!

Private Obsession Plot:
A supermodel is kidnapped and imprisoned by a stalker, whose goal is to make her love him.

Review:
High class fashion model and ultra feminist Emanuelle Griffith (Shannon Whirry) has a stalker named Richard (Michael Christian) on her trail: When he sees an opportunity, he kidnaps her and inters her in a completely locked down room he’s prepared for her in his mansion. The room has cameras installed in it so that he can spy on her, and he can speak to her through speakers. He feeds her day after day (through a doggie door), and after a week or so, she despairs and offers him her body just to get out of the room for a bit. They have a passionate lovemaking session, and he creepily declares how perfect she was and how she measured up to his expectations, which gives her a little leeway with his trust. She later tries crawling out of the doggie door and gets stuck, leading to a scene where he takes her clothes off and oils her down with butter so that she can slip back through. Meanwhile, Richard goes shopping for his captive, buying her expensive clothes and lingerie, not realizing that there’s a private detective (played by Bo Svenson) hired by her family out looking for her. Richard spends a lot of time lecturing Emanuelle on the futility of feminism, while also expecting her to dress up in nice clothes for civil, candle-lit dinners, followed by more sex. She is planning to soften him up with more trust, and he does eventually open up her boundaries a bit more, until finally she gets the drop on him, locking him in her prison, while she can simply walk out the door. The final scene is funny: The detective walks up to the door, knocks, and she answers as if nothing has been amiss for the duration of her captivity, and tells him with complete assurance that she’s fine and requires no assistance.

A skeezy plot and voyeuristic approach gives Private Obsession a certain appeal, but it’s a weird thing to be turned on by the sexy captive prisoner / torture aspect of the film. Shannon Whirry gives a strong, committed performance, and the material she’s required to wade through here is pretty lurid, but she’s a pro and emerges a winner. Christian gives a sweaty, sleezy performance, despite trying to give his character some gravitas. Some scenes were shot on Hollywood Boulevard where Dennis the Menace and The Firm were playing at the Chinese Theater. Written and directed by Lee Frost, whose last film this was.

Skin Max, a new sub label from MVD, has just released a handful of double feature erotic thrillers, and this one pairs two stalker / imperiled woman features together. Private Obsession is the stronger of the pair, while Midnight Confessions is the clear loser. Both films are presented in a standard definition full-frame presentation, but both also feature the trailers as a bonus. All of these Skin Max feature Multicom titles, and so I’m hoping to see a handful of other titles like the Masseuse films, to name just a few. These DVDs are priced around the $10-$15 range, so grab them while they’re in print. 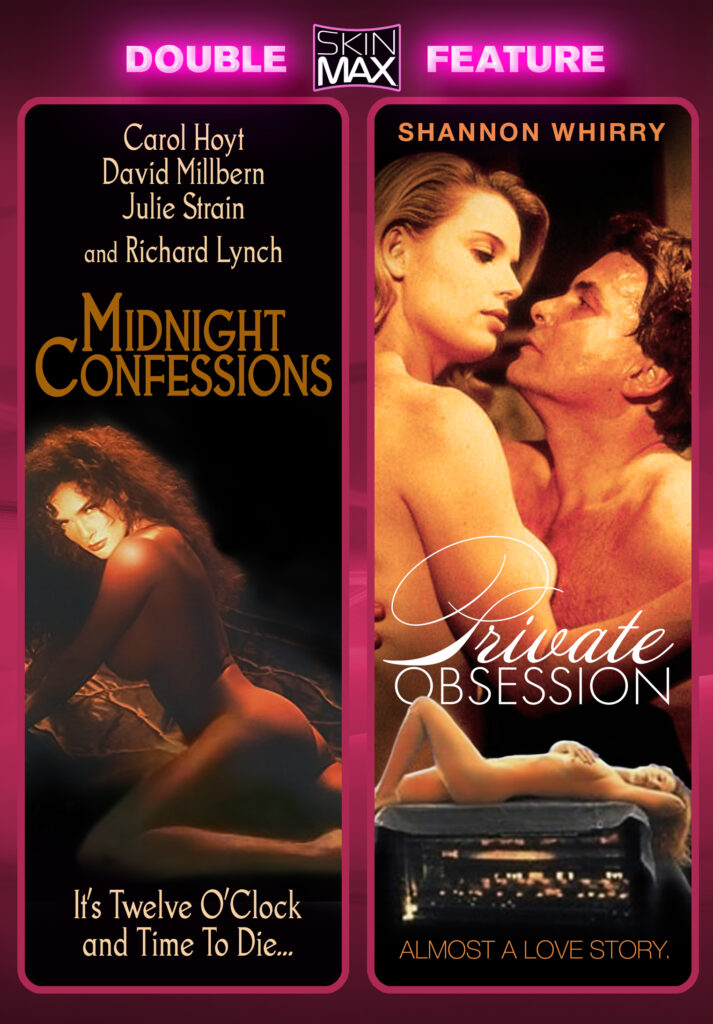