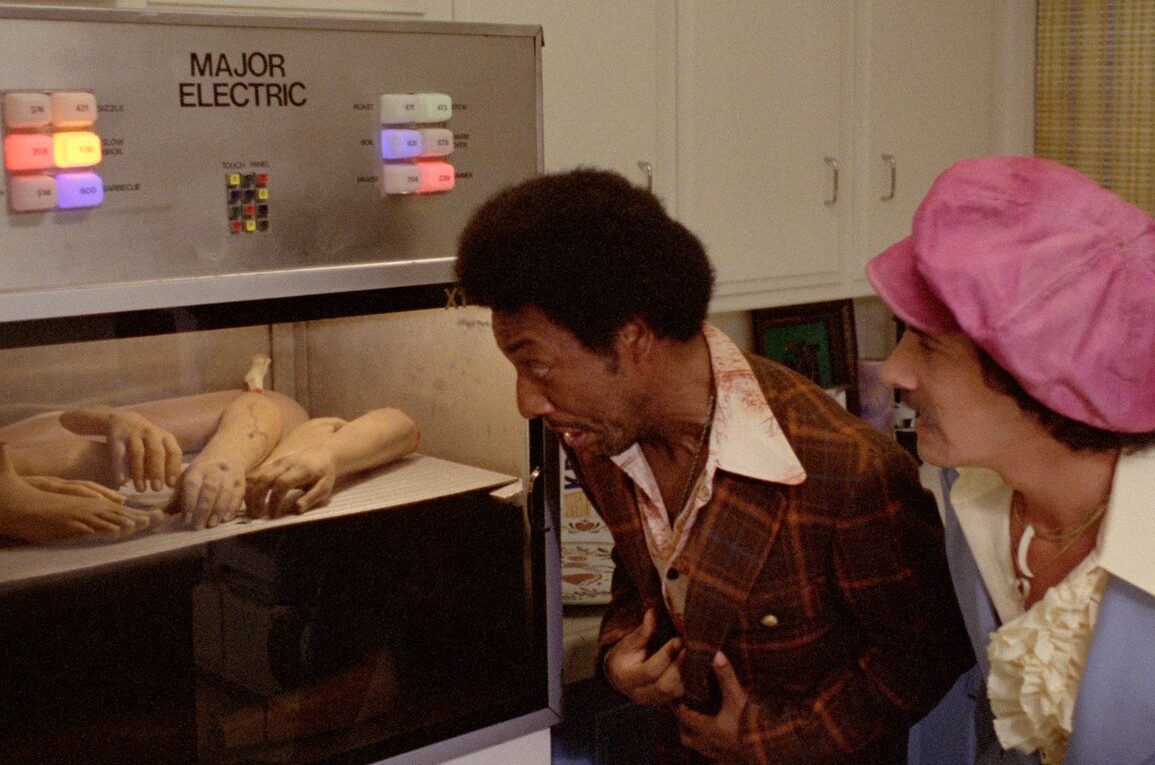 Microwave Massacre isn’t really intended to be “horror” so much as a comedy, and for that it kinda works, but it has weak knees that can barely hold itself aloft.

Plot: Fed up of his wife’s bad cooking, Donald kills her and turns to cannibalism to satisfy his appetite.

Review: Bored middle-aged construction worker Donald (played an endlessly hamming Jackie Vernon) is pretty much living in a hell of his own making. His co-workers disregard him, and he goes home every evening to a nagging wife who refuses to simplify the meals she makes for him for dinner. Instead of an easy-peasey bologna and cheese sandwich that he so craves, she goes out of her way to make terribly concocted French cuisine that he simply can’t eat. When he reaches his breaking point and gets drunk one night, he kills his wife and instead of getting sentimental and remorseful about it, he eats her, saving her head in the refrigerator! Turns out she tasted pretty good, so good old Donald begins craving more of that cannibalistic cuisine. He starts inviting hookers home and slaying them for dinner (and reheating them in his gigantic microwave), and on top of that, his sex life picks up and his self confidence soars. After inviting his co-workers over for grub, they find out his dirty secret, and the gig is up … but not before he has one last scrumptious meal!

Silly to the max and light on gore (but it has plenty of nudity, so go figure), Microwave Massacre isn’t really intended to be “horror” so much as a comedy, and for that it kinda works, but it has weak knees that can barely hold itself aloft. The best part about the movie is its grungy atmosphere and its amusing performance by comedian Vernon (he’s always telling a joke), and since I never saw this in its original format (VHS), I may have missed out on its analogue-shot glory. Arrow Video has resurrected this relic from the dustbin, and it’s been remastered in 2K, which I bet its director Wayne Berwick never dreamed of. Hand it to Arrow for including tons of special features, including a commentary, make-of features, and more. New artwork was even commissioned for the cover (it’s reversible), and I’m telling you that if you’ve ever held out to watch this movie, now is the right time to watch it because it’s never been released with such care and loving devotion.