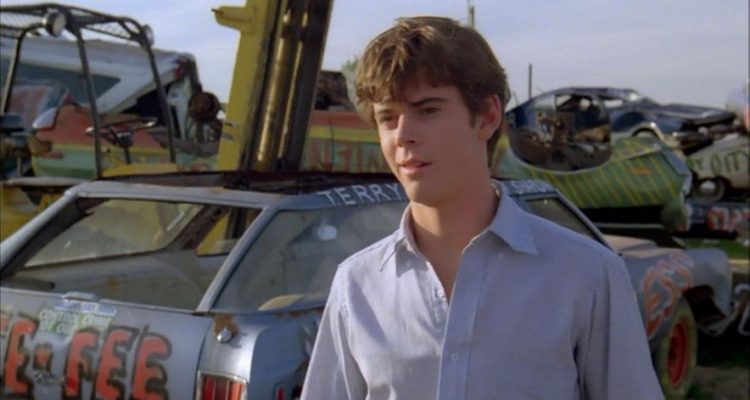 Grandview U.S.A. is nicely directed by Randal Kleiser, and as a coming of age drama it hits the right notes, though Thomas Howell’s character doesn’t really shine.

Plot: Life in the small town of Grandview, Illinois is one that is just like any other city or town. Tim Pearson, soon to be graduating high school wants to go to Florida to study oceanography. He meets Michelle “Mike” Cody and is attracted to her. She runs the local Demolition Derby place. Ernie “Slam” Webster is on of the drivers in the derby who’s wife is cheating on him and wants to later on be with Mike. Tim falls for Mike and a big love triangle is about to happen.

Review: An under-the-radar coming of age drama starring C. Thomas Howell as an 18 year-old kid named Tim who has only a week left of high school before he graduates. He dreams of becoming an oceanographer, but he’s got a big problem: He lives in Middle America … in a small town called Grandview where nobody ever leaves, and the odds are against him unless he can somehow find the gumption to get out of town. When he meets 27 year-old Mike Cody (Jamie Lee Curtis, always welcome), who runs a down and out demolition derby that is on the verge of going out of business, Tim’s world is shaken up for the better when he falls for her – and she for him – in the most unlikeliest of circumstances. The closest thing she has to a steady boyfriend is her old friend Slam (Patrick Swayze), who is going through a really difficult breakup with his wife, and so when young Tim gets in the way, Slam (who’s a really good guy with bad luck) has it out for Tim. With some typical small town drama thrown in the mix, Grandview U.S.A. is exactly what it sets out to be and for that it’s tops.

Infused with some pop culture references of the day (MTV music videos literally become part of Thomas Howell’s fantasies in the film), Grandview U.S.A. is nicely directed by Randal Kleiser (Flight of the Navigator), and as a coming of age drama it hits the right notes, though Thomas Howell’s character doesn’t really shine. Curtis is the real star of the movie, but it’s not really her character’s story. Fans of 1980’s coming of age dramas may want to check this one out at some point.

Kino Lorber has just released a newly remastered in HD Blu-ray of Grandview U.S.A., and I was thrilled to watch it again in its upgraded digital format. I own the DVD as well, and the disc looks outstanding. It’s well worth the upgrade. There are no special features on the disc, however.