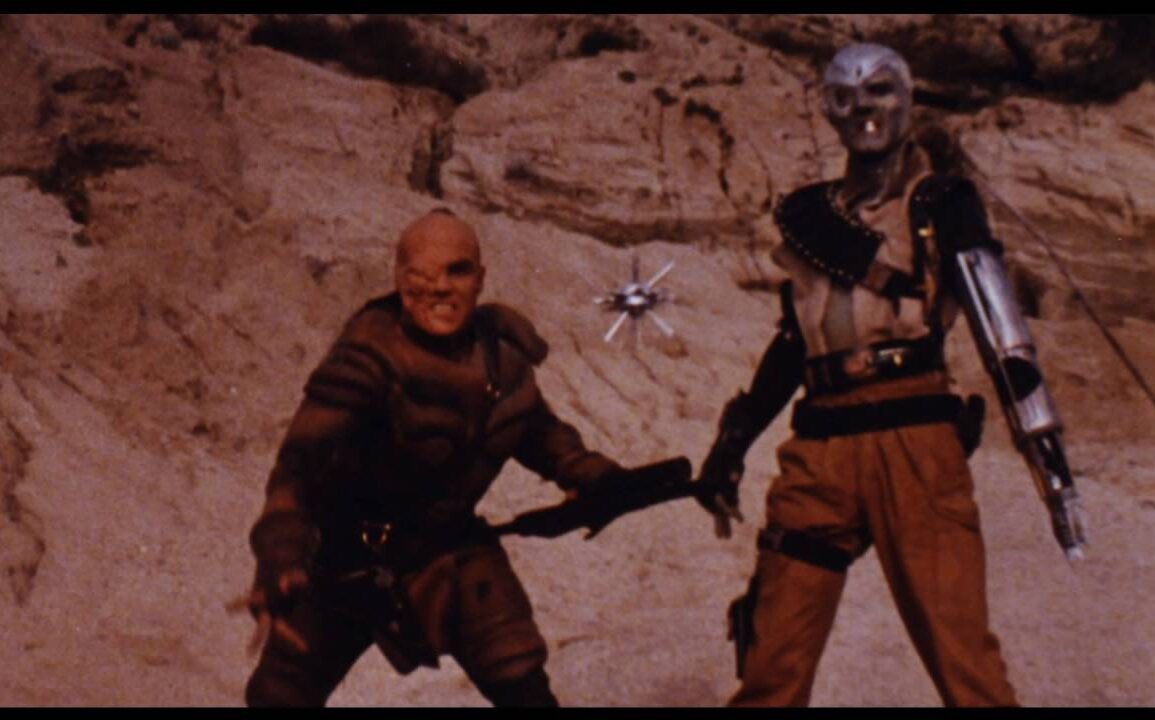 The story is an incoherent mess, and the leading actor is as wooden as they come, but the movie also has a terrific score and interesting visuals.

Plot: Dogen (Jeffrey Byron), a space ranger, searches for Jared-Syn (Michael Preston), a mystic who wants to employ a colossal crystal to enslave the people of the planet.

Review: I have seen some doozy stories in my day – crazy stories that defy logic, such as The Room. Few movies, though, are as impenetrable as Metalstorm: The Destruction of Jared-Syn. I can’t tell you what the story is about other than this guy wants to find Jared-Syn. And there are crystals. Lots of crystals. Want an example? Early in the movie, this guy gets squirted with green goo (think Nickelodeon) and then finds himself lying on his back in a weird dimension. An ominous figure (I assume it’s Jared-Syn) puts a red crystal beside him, and he dies. Yup. He dies. Where is this place? Why kill this guy? How did the red crystal kill him? I don’t know. Because. That seems to be the only answer in the movie.

The acting is mostly unimpressive. The main character could be mistaken for a cardboard cut-out. He wants to hunt down Jared-Syn because – he’s a good guy, and Jared-Syn is a bad guy. That’s all I can figure. Jared-Syn himself is unmemorable. He’s a villain. That’s it. Kelly Preston is gorgeous but gets nothing to do and figures very little into the story. Richard Moll is fine, but I can see Bull from Night Court when he’s speaking. Only Tim Thomerson is noteworthy in this movie, and that’s because, well, he’s Tim Thomerson – he always has a personality, no matter what role he’s playing.

Despite clocking in at 84 minutes, I found this movie boring in parts. That has to do with the insane amount of filler in this movie – I swear, there’s lots and lots of driving. Lots of driving. Driving around, looking for Jared-Syn. And then more driving. Race car movies don’t have as much driving as this movie had. I fell asleep twice. I never do that when watching movies, but this one literally put me to sleep. I feel like this was a 45-minute movie in an 84-minute run time.

As my buddy J-Man pointed out, the ending of this movie was totally false advertising. The subtitle of this movie is literally “The Destruction of Jared-Syn,” and yet, Jared-Syn is not destroyed. If anything, he wins in the end! Wins! How is this his destruction? If you wanted Jared-Syn to be destroyed, this isn’t your movie.

It’s not all bad with this movie. The makeup is decent. Richard Moll’s character is a cyclops, and instead of doing the traditional big-eye-in-the-forehead deal, he has one normal side of his face and one mauled side. It was very realistic. I also liked Jard-Syn’s son; I thought his outfit was good, and he had a unique look. The visuals were awesome – and I got to see a lot of it with all the driving. It was the perfect western-type setting for a story of miners and outlaws. The score was jaunty and brought feelings of high adventure, even if everything happening on the screen didn’t quite live up to the music.