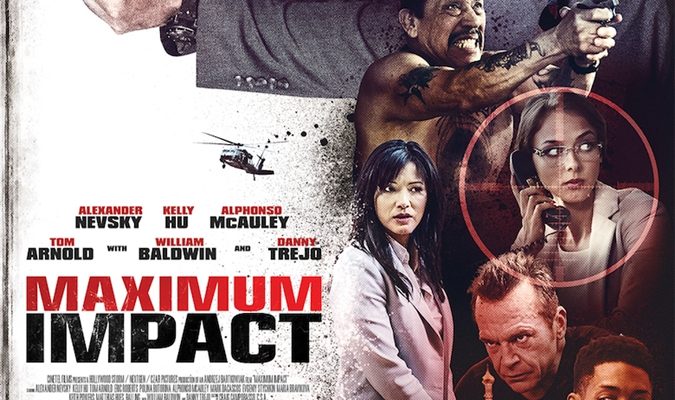 Alexander Nevsky (Black Rose), Kelly Hu (The Tournament) and Mark Dacascos (Hawaii Five-0) star in Maximum Impact, written by Ross LaManna (the Rush Hour movies) and directed by veteran Andrzej Bartkowiak (Exit Wounds, Cradle 2 The Grave and DOOM).  When US Secretary of State Robert Jacobs (the immortal and ever ubiquitous Eric Roberts) travels to Russia on a diplomatic summit to ease US-Russia tensions, his daughter (played by Russian singer and actress Polina Butorina) is kidnapped by a shadowy organization led by an unnamed boss (William Baldwin) who employs former actor turned syndicate member Tony Lin (Mark Dacascos) and his enforcer partner (Matthias Hues).  Russia’s Federal Security Service specialist Maxim (Nevsky) and a US Secret Service operative (Kelly Hu) team up to find the Secretary’s daughter and clean up any mess before anybody else higher up in either government gets word of the incident and thus avoid a major international crisis.  All along the way, each respective group is chock full of team members piling on the comic relief, including Tom Arnold, Danny Trejo, Alphonso McAuley, Evgeniy Stychkin and Bai Ling, among others.

In a film that is vintage Bartkowiak, Maximum Impact is heavy on colorful characters and recognizable actors or otherwise big names (and in fact reunites several actors such as Kelly Hu and Tom Arnold, who have been featured previously in Bartkowiak films), but is conversely light on story.  There are so many lovable people in this film that only a handful really get enough time to build their character, and even fewer are very relevant to the plot.  Tom Arnold serves as what amounts to a recurring “Tom Arnold-esque” character in Bartkowiak’s movies, and is every bit as funny as he has been before, albeit with a different name every time.  Mark Dacascos is, without a shadow of a doubt, the one who truly steals the show in this film, taking on the antagonist role (which he also executed brilliantly in the Hawaii Five-0 reboot) with virtually every second of every minute of his presence being by far the most entertaining aspect here.  In addition to carrying the bulk of the plot as antagonist, he adds about as much humor as the more intentionally written comic relief characters, even doing a fine job in parodying not only himself and his career, but martial arts stars in general.  His character effectively adds up to what amounts to an inside joke and metaphor for the career path of your typical action actor later in their career, something he seems to take in stride.  Kelly Hu is also very good in this movie, and is an ideal presence to competently act as “straight woman” to so many comedy elements.  She also works well as a pairing with Alexander Nevsky, and generally lives up to her ability to serve as a strong female protagonist, and does so very naturally without overplaying that aspect.  Nevsky is a phenomenal physical presence as always, but could have been given far more screen time to display his physicality, something which could have been substituted for so many extra faces.

However, with so many characters and so little time, Maximum Impact doesn’t quite live up to the onscreen product based on all the talent on hand.  With actors such as Dacascos, Nevsky and Matthias Hues, there was all kinds of potential for some stellar fight choreography and impactful scenes in the final act, but their interaction is sadly brief and with very little sense of tension or build.  There are some spots of brilliance, such as a spoof commercial and an action-dance combo scene – both Dacascos moments – as well as a Tom Arnold vs Kelly Hu boxing match.  Had this been given a little more detail and tension, and with far fewer characters to focus upon, this could have been far more than it was.  Maximum Impact might not impact the audience to the max, but it hits just hard enough to leave an impression. 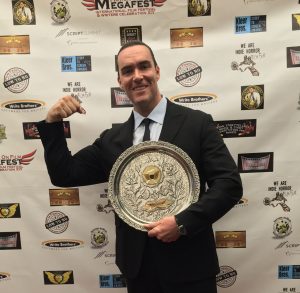 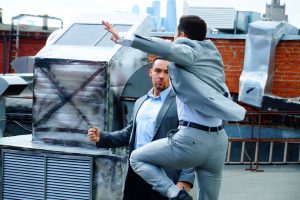