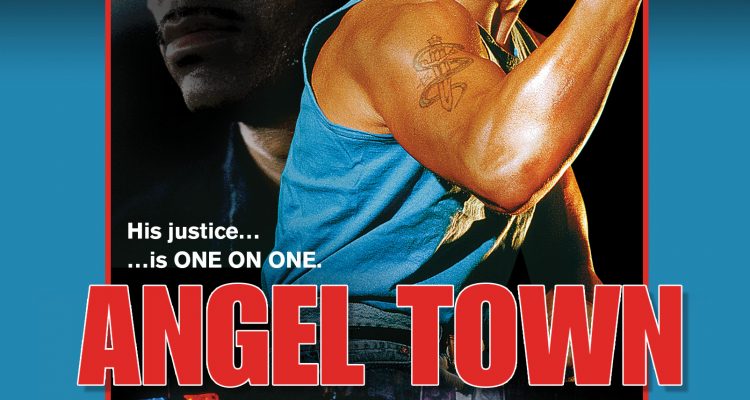 The film runs a little too long, but it’s a gem of a movie. Gruner was never better.

Review: This is Olivier Gruner’s first “vehicle” film. Gruner, in real life, was in the French Army, having trained in karate and was later a kickboxing champion. He broke into movies by impressing a producer and he starred in a string of “B” movies, most of which ended up going straight to video, none of which really utilized his talents and abilities the way the first three did (Angel Town, Nemesis, Savate). Here, in Angel Town, he plays a nice guy named Jacques who comes to Los Angeles to attend a graduate program, and he isn’t in L.A. for one whole day before he is fighting off gang members who are in a turf war in the neighborhood where he’s renting a room. He’s meek and mild, and prefers not to fight (even though in the film he is a former kickboxing champion), and when the Chicano gang that’s harassing his lady landlord’s young son gets the picture that Jacques is not to be trifled with, they get really aggressive. Gruner tries hard to attend his classes at the nearby campus, but some days he can’t make it because he gets into long-lasting bouts with dozens of gang bangers who can’t compete with his fancy footwork. The climax of the film has Gruner (with the help of a vet in a wheelchair, sporting a machine gun, and about a half a dozen students from a nearby dojo, run by his Asian kickboxing friend, played by Peter Kwong) fighting about two dozen gang members. This fight is lengthy and pretty awesome.

Gruner’s good-natured and clean-cut demeanor is a genuine, but odd fit for this urban gangland action film. He’s different than any other action or martial arts star, but he’s almost too mild as a screen presence. He has a slight, but muscular build, and his soft voice with its thick accent definitely puts him in the fish-out-water category. He clearly has skills as a martial artist, and his character shows pain and frustration when things go wrong for him and the people he cares about, but he never overacts, which is commendable. The film runs a little too long, but it’s a gem of a movie. Gruner was never better. It was directed by Eric Karson, who also made The Octagon with Chuck Norris and Black Eagle with Sho Kosugi and Van Damme.

MVD Rewind has been slaying with their recent releases, culled from the Imperial Entertainment library. Their premium release of Angel Town on Blu-ray is presented in high definition widescreen, and includes an archival commentary by Eric Karson, which I’m assuming was from the laserdisc. There’s a new interview with Karson, and other members of the cast and crew, as well as an archival “making of” feature. Star Olivier Gruner is entirely absent on the supplements, which is disappointing. Also included is a fold out mini poster.