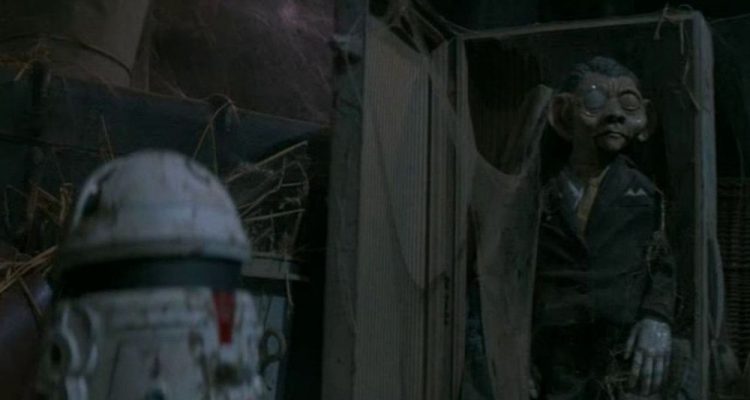 Kino only released the heavily edited version. In that regard, the old Anchor Bay DVD is the superior choice.

Plot: When Joey’s dad dies Joey is starting to act strange. He’s got psychic powers. He can talk to him on the phone! His red toy telephone! But what he doesn’t know is that he is not talking to his dad. He is talking to an evil dummy and the evil dummy is starting to make Joey’s world a living nightmare.

Review: A German film shot in English primarily on an American military base in Germany with child actors who never made other movies, Making Contact tries to emulate the awe and wonder (and fear) of Spielberg’s pictures, namely E.T., Close Encounters of the Third Kind, and Poltergeist. Little kid Joey (Joshua Morell) is reeling after the loss of his father, but only a few days after the funeral, his bedroom somehow becomes a portal to another dimension where the spirit of his father calls him on his toy phone. Simultaneously, a malevolent spirit encased in a ventriloquist dummy haunts him and does battle with the force of good, all within the confines of Joey’s bedroom. Meanwhile, Joey begins manifesting telekinetic powers and isn’t afraid to show off to friends or his mother, which ends up creating a situation when guys in hazmat suits show up at his house and puts it under quarantine. Joey is transported to a spirit realm where he’s forced to enter into a labyrinth where he encounters bizarre creatures, including a giant monster cheeseburger. Some of the neighborhood kids get transported to the same place where they run a gauntlet of perils, and after a shocking encounter with the evil spirit, Joey’s fate takes a surprising turn.

One of director Roland Emmerich’s first films, Making Contact (known as Joey outside of the U.S.) was drastically trimmed down and released in a 79-minute version by New World Pictures, and that cut is a baffling, nearly incomprehensible collection of scenes that ram into each other without much rhyme or reason. The performance by young Morell is commendable, and the special effects and score (the composer for the U.S. version is Paul Gilreath) are all very well produced. The longer, 98-minute German version is a much more satisfying viewing experience, with scenes and motivations that make sense, more characters, and a climax that significantly changes what happens to young Joey. There are also more special effects (some involving Star Wars toys, which may have contributed to licensing issues), and a different score (by Hubert Bartholomae). This is one of the more puzzling coming of age fantasy films for kids to come out of the 1980’s, and I suppose you could compare it to The Peanut Butter Solution for its sheer audacity and bonkers sense of imagination. The fact that we got this at all is sort of a minor miracle.

Kino Lorber just released a Blu-ray of the 79-minute version of Making Contact. In terms of looking and sounding superior to the previous DVD release by Anchor Bay from 2002, there’s no contest, but Anchor Bay had the forethought to release a two-disc set that also contained the 98-minute German cut, which Kino didn’t do. I’m sure there will be plenty of collectors and curious consumers who won’t mind the fact that Kino only released the compromised version, but it’s strange especially considering that they recently released both versions of No Retreat No Surrender, for example. For my money, this release is incomplete and therefore not entirely satisfying.