A high end Madame recruits beautiful young women to cater to the rich and elite class in France.

The press loves to write stories about the elite and rich upper class and the singular figure they all seem to flock to: The beautiful and cunning Madame Claude (Francoise Fabian), who has all the dirt on every politico and famous man in modern-day France. Her clients expect only the best call girls, and she’s always on the lookout for new recruits she can hire on, which can sometimes be a challenge. While she conducts her business in as clandestine a manner as possible, there are always those who would try to bring her business crashing down, like a sleazy tabloid photographer (played by Murray Head) whose girlfriend also happens to be one of Claude’s most prominent and highly requested and desirable girls, a stunning looking woman named Anne-Marie (Vibeke Knudsen-Bergeron) who knows what her boyfriend does for money and despises it, but continues to tolerate him anyway. Meanwhile, Claude focuses on a young woman named Elizabeth (Dayle Haddon) who is fresh out of school and whose career prospects are on the downtrend until Claude propositions her to work for her, and having the ultimate combination of curiosity and boredom, Elizabeth takes the gig and is soon taking on clients, which include the handsome son of a very rich and powerful man (played by Klaus Kinski), who wants to treat his son to a beautiful treat. With powerful forces at work to bring Claude’s empire of sin down, she only has a limited amount of time remaining to bring her style of decadence to those who can afford to pay for it …

A slapdash script that tries to go for intrigue and importance melded with frothy eroticism and frolicking sexcapades makes Just Jaeckin’s Madame Claude an uneven mixture for fans of Eurosex dramas. At times it feels inconsequentially lurid and trashy, while at its best it tries to be a halfhearted thriller, but it never quite achieves a sense of valid direction due to too many subplots and kinky interludes. The performances are adequate, and there’s lots of beauty to look at and appreciate, and yet the film’s focus gets lost in its attempts to try to bring a real-life controversial French figure to the forefront of an erotic drama. The score by Serge Gainsbourg is nice, and the photography is attractive, so there are certainly aspects of the film worth recommending.

Cult Epics has just released a special edition Blu-ray of Madame Claude, and it comes in a warm, crisp 4K HD transfer, plus a commentary by a film historian, as well as some interviews, trailers, a promo gallery, and the soundtrack CD as a bonus. 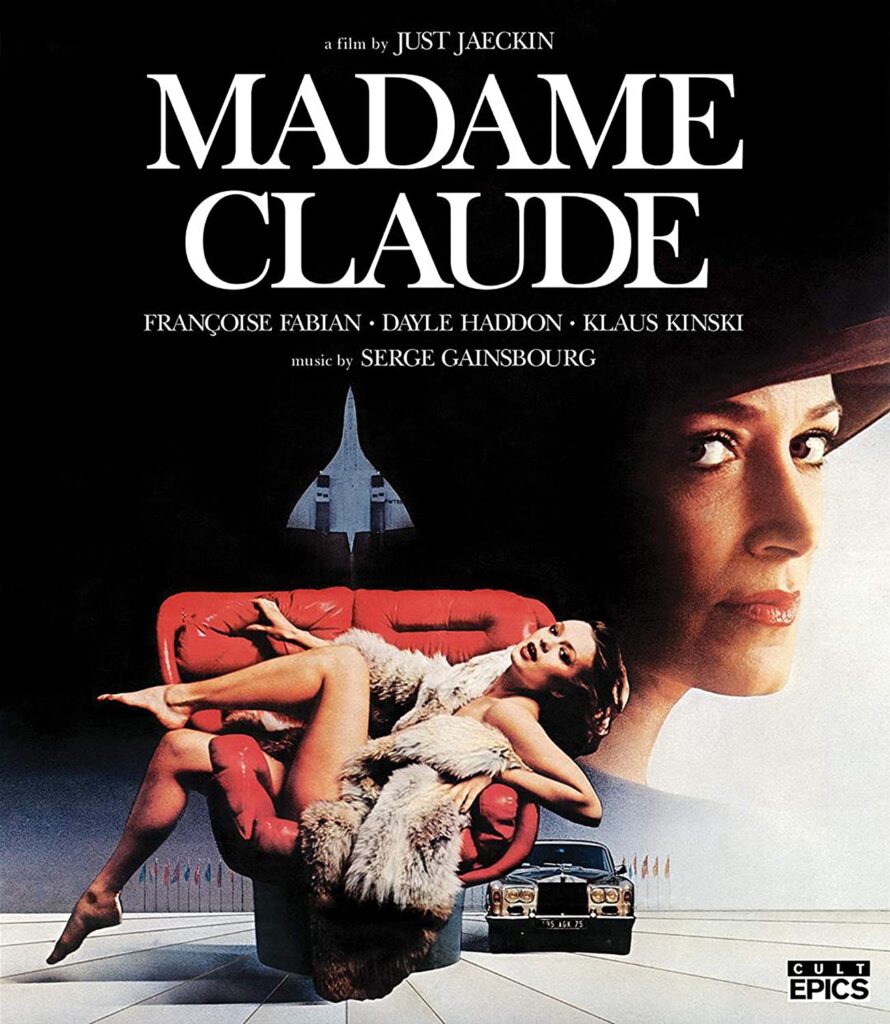