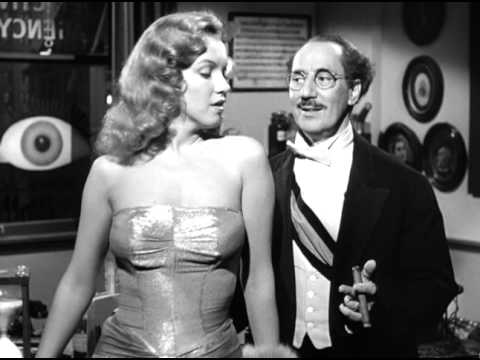 Summary: While there a few laughs, Love Happy is definitely the weakest of the Marx Bros. movies, with the three brothers not sharing any scenes together and Groucho absent for most of the picture.

Plot: A group of actors hoping to open a new play are ensnared in a smuggling ploy involving a missing diamond necklace worth one million dollars.

Review: If you know any Marx Bros. movie, you know that the plot is not really that important. This movie follows the main formula of the other pictures: some attractive young lovers are friends with the Marx Bros., and they enlist the hapless trio to help them deter and defeat whatever antagonists the movie has. There are usually some musical parts that break up the flow of the film, as well as skits primarily geared to the Marx Brothers’ specific talents.

The one major problem with this movie is, Groucho is barely in it.  Groucho, besides being a quick wit, is an integral part of any Marx Bros. film, because he generally takes the audience’s view of the performers.  When Chico or Harpo are acting crazy, or one of the straight characters is being sneaky or stupid, he’ll break the fourth wall and point it out. He’s also the only one who can straight up have verbal matches with Chico – with Harpo, it doesn’t work, because Harpo never speaks, so that whole part of the comedy is missing in this movie.

That being said, the movie itself is fine.  The storyline is flimsy, but in general, as I’ve said, most Marx Bros. movies are. It’s like Abbott and Costello – people didn’t flock to their movies because there was fantastic writing, they went to see the famous duo’s schtick.  Same with the Marx Bros. You want to see Chico try to con Groucho, Harpo drive people nuts with the tooting of his horn, etc.  Harpo still does his patented act in this one, and he has the funniest scene – at one point, he is mesmerized by the villainess of the film, and her two stooges (one being Raymond Burr!) proceed to pull all manner of items out of Harpo’s oversized trenchcoat, including a block of ice, a mailbox and a dog. There’s another great scene where Harpo is trying to tell Chico that the main leads are in danger, leading to a ridiculous game of charades. All that is good fun, and the highlights of the movie.

The small part that Groucho does have is okay, but nothing particularly memorable. He does interact with Marilyn Monroe (!), who has a small, throwaway scene as a client of Groucho’s. Otherwise, he has little presence in the film, which is a pity – Groucho, to me, was always my favourite, even if he wasn’t quite as talented musically as his other two brothers.  If Groucho isn’t allowed to do much of his bantering with other characters, I’m probably not going to like the movie as much.

So, do I recommend this movie?  Sure, but only if you’ve seen some of the Marx Bros. better movies first – films like A Night at the Opera, Duck Soup, and A Day at the Races – those are classic Marx Brothers movies that deserve a look for anyone who hasn’t seen them yet.  Only bother with this one if you’ve seen the others.