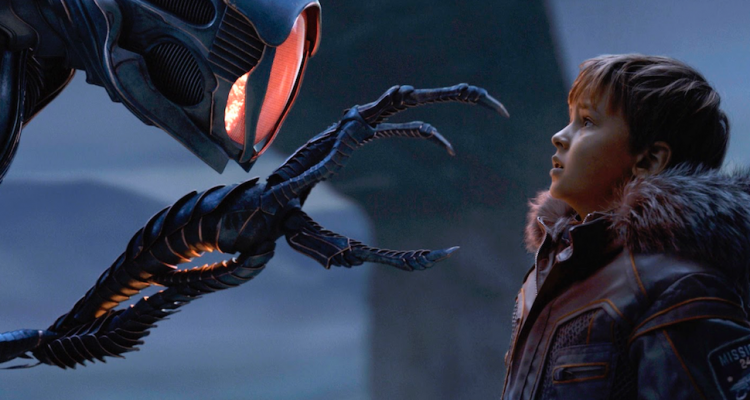 Plot: After crash-landing on an alien planet, the Robinson family fight against all odds to survive and escape, but they’re surrounded by hidden dangers.

Review: With Earth quickly becoming an uninhabitable planet, a very few select humans are chosen to colonize another far off planet, with the hope to give humanity a fresh start. Led by the Robinson family – Former military man John (Toby Stephens), scientist and engineer Maureen (Molly Parker), and their kids Will (Maxwell Jenkins), Judy (Taylor Russell), and Penny (Mina Sundwell) – the expedition goes wrong, forcing the entire crew to land on a (hopefully) inhabitable planet. Once there, young Will encounters an alien robot that for some reason pledges its allegiance to him. The robot has the capacity to help the community out a great deal, but it also reveals itself to contain an incredibly dangerous power that scares the colonists, causing division and unrest. As if that weren’t enough to keep everyone busy, the planet is host to a whole bunch of huge, hungry creatures that poses a threat to the new inhabitants. When Maureen discovers that the planet is dying and will be uninhabitable in a very short time, the race is on again for everyone to regroup and figure out a way to get enough fuel to make it back to the space station. The biggest threat of all is not the creatures, the robot, or the situation everyone finds themselves in, but from one of their own: a devious and cunning doctor named Smith (Parker Posey), who will do anything it takes to survive, even if it means killing everyone else.

The Netflix reboot of the classic cult show from the ’60s and the big screen attempt from the ’90s,Lost in Space is a well produced, if meandering family-friendly apocalyptic science fiction program that deals enough with the close to dying Earth to include it here. The themes of the show are nothing new, but it remains a watchable piece of entertainment that grows a little more compelling as it goes along from one catastrophe to the next, building to situations that give viewers just enough to hang onto to keep coming back for more. Kids may be a little bored by it, but young adults and adults into spacey stuff should enjoy it. Earth 2 did the same thing, but better.

Special Features on the blu ray include the colorized version of the original pilot from the ’60s, deleted scenes, and four featurettes. Fans of the series might want to pick this up for the hard copy collection.

LOST IN SPACE Blu-ray™ and DVD Bonus Features Include: