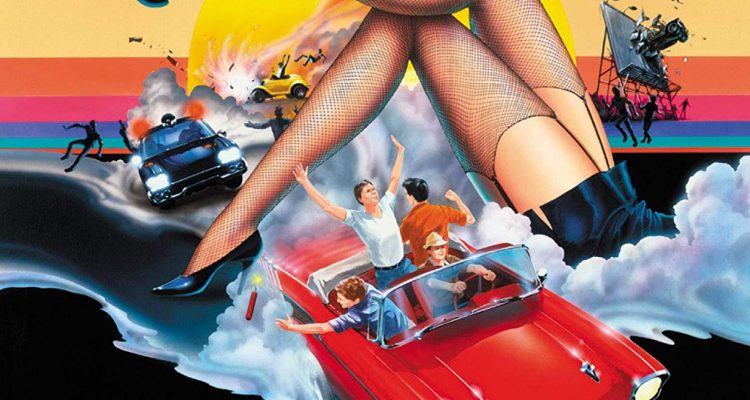 There’s something to be said about fun junk like this still having a shelf life nearly 40 years after the fact.

Plot: Set in 1965, four rowdy teenage guys travel to Tijuana, Mexico for a night of partying when they are joined by a heartbroken housewife who is in town seeking a quick divorce.

Review: Woody (Tom Cruise), Dave (Jackie Earle Haley), and Spider (John Stockwell) are three horny high schoolers, circa 1965, who pack up and head for Tijuana for the weekend. They take with them wimpy Wendall (John P. Navin Jr.), who’s got the extra cash, and almost right away they get into trouble: First, they pick up an extra passenger, a distraught housewife (Shelly Long) who wants to go to Mexico to get a fast divorce, and then they tick off a local corrupt lawman in TJ, who has his eye on them. Dave’s first priority is to get laid with the first hooker he can find, while Spider’s ill temper gets him thrown in a Mexican jail. Wendall prowls around trying to score a deal on firecrackers, and Woody and the housewife hit it off and spend the night together, which is his first sexual experience. When Woody finds out that Spider is in jail, he has to come up with a plan, but also on the hook are Dave and Wendall who are taken prisoner by some crazed Mexicans looking for revenge. The antics add up to a pretty fun nostalgic coming of age comedy.

A fun, if slight, teen sex comedy from the early ’80s, Losin’ It is notable for having three solid leads, and for having a catchy theme song by the Jeff Alan Band, which opens and closes the movie. Future heavyweight director Curtis Hanson directed this. There’s something to be said about fun junk like this still having a shelf life nearly 40 years after the fact. It doesn’t quite hold up next to fellow sex nostalgia movies like Porky’s or Mischief, but it ain’t chopped liver.

Kino Lorber’s new blu ray of Losin’ It looks nice in its 2K source transfer, but I noticed some dips in audio here and there. If you’re a collector of ’80s coming of age films like I am, then it’s time to retire your MGM DVD and upgrade.