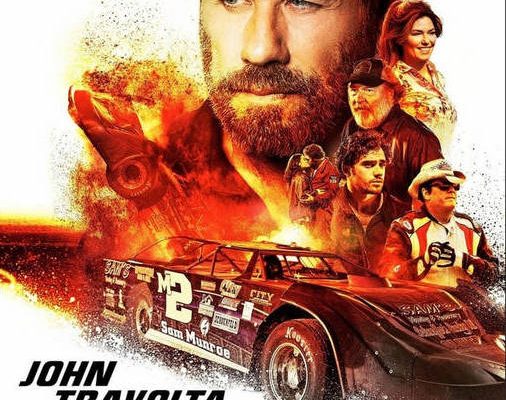 Anything with Travolta is worth watching at least once however, Trading Paint is generic in every sense of the term. It’s on par with a Lifetime Original.

Plot: Veteran race car driver Sam Munroe and his son, a fellow driver from a small town overcome family and professional conflicts, balancing competition, ego, resentment and a racing nemesis to come out stronger on the other side.

Review: Sam Munroe (John Travolta) is a has-been Talladega racecar driver, whose son Cam (Toby Sebastian) is struggling to work his way up the racing circuit under his father’s banner, but because his dad’s name isn’t what it used to be, their car, equipment, and sponsorship are weak. Cam has had enough: he quits working with his father and begins racing with his father’s old nemesis Linsky (Michael Madsen looking and sounding like rough leather and sandpaper), which puts Cam at odds with his tired father. Sam gets a fire in his gut and takes to racing again, and wins a few races, which puts him in the running for a championship. This will be the first time Sam and his son will be racing against each other, and the local media catches on to the story, and suddenly Sam becomes relevant again. With support from his best friend Stumpy (Kevin Dunn, who gives the best performance in the movie) and his pretty girlfriend Becca (Shania Twain in an earnest, trying performance), Sam suddenly has the will to overcome. When his son is injured in a race, Sam puts everything on the line to make sure he recovers, but next time he’ll stake it all on making sure his son becomes the next champion.

Travolta’s trajectory from superstar (Saturday Night Fever) to struggling has-been (Look Who’s Talking Now) to career-making comeback (Pulp Fiction) is the stuff of Hollywood legend. He had a fantastic run as a superstar in the ’90s thanks to hits like Get Shorty, Broken Arrow, Phenomenon, and Face/Off, but then his shining star dipped with massive bombs like Battlefield Earth and Lucky Numbers. It got to the point where his movies were only afforded one-week theatrical runs (not-bad stuff like Killing Season and I Am Wrath), and it seems like he’s stuck in this made-for-VOD fare where not much is required of him as an actor. In the last year or two he’s been in forgettable junk like Criminal Activities and Speed Kills, while taking some time to do some real fine supporting work in the western In a Valley of Violence. His latter choices veer towards the mundane or completely inconsequential, and Trading Paint falls more in the latter category, unfortunately. It suffers from very generic direction by Karzan Kader (who?) and a made-for-cable TV quality of control. It’s watery to the extreme and resembles a Lifetime movie. I tell you, what, though: If Shania Twain ever decides to embark on a career of Lifetime movies, she’ll be the biggest there ever was at it. As for Travolta, he desperately needs to course correct his later career if he’s ever going to deserve another big comeback.

Trading Paint is now available on Ultra VOD, and will be in theaters and On Demand on March 22nd.