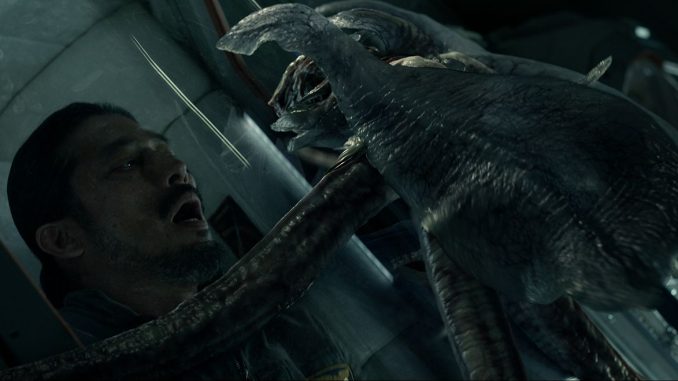 Plot: Astronauts (Jake Gyllenhaal, Rebecca Ferguson, Ryan Reynolds) aboard the International Space Station are on the cutting edge of one of the most important discoveries in human history: the first evidence of extraterrestrial life on Mars. As members of the crew conduct their research, the rapidly evolving life-form proves far more intelligent and terrifying than anyone could have imagined.

Review: I went into this movie with zero expectations.  I was expecting to see a clone of Alien and was not disappointed. Maybe disappointed isn’t the word. But this was exactly what I thought it would be. Even the opening title was alarmingly similar to Alien with the wide spacing between the letters.

So taking it as read that this is an Alien re-tread I have to say it was still thoroughly entertaining. The cast are likeable and you care about their welfare although you assume they are ultimately doomed. They all exude an appropriate amount of wonder at the discovery of this new life form and are suitably freaked out when they need to be. There’s a constant feeling of tension and growing sense of claustrophobia as the crew one by one face their fate.

The main problem with this movie is that it all just feels like a photocopy of other better movies- The aforementioned “Alien” in subject matter, tone and dramatic tension. “Gravity”, in terms of visual style and CGI wonder.  The soundtrack by Jon Ekstrand paid homage to Hans Zimmer’s “Interstellar” and even made a few nods to “2001- A Space Odyssey”.
That being said, none of these familiarities spoiled my enjoyment.

Director Daniel Espinosa certainly ramps up the drama and the constant zero gravity is an extremely impressive visual achievement.
The ending was also rather satisfying.

All in all, if you’re happy to boldly go where you’ve been before then “Life” won’t disappoint. If you’re looking for something truly original then this isn’t for you.