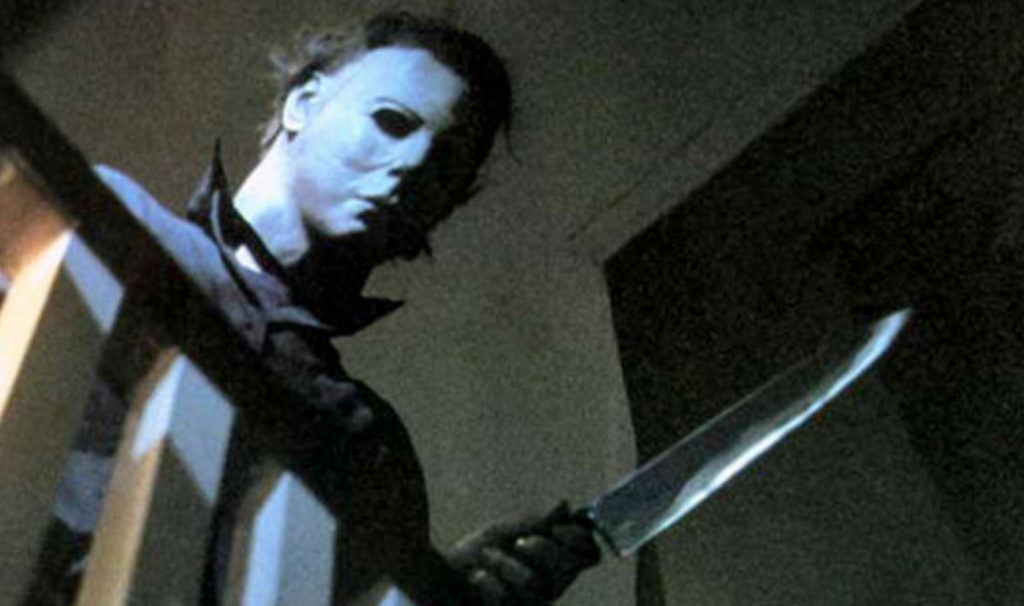 The Halloween Series: A Retrospective

Before Jason…before Freddy…before Chucky…there was Michael. A horror icon recognizable by his pasty white, featureless mask, his (grey? black?) jumpsuit and of course, that enormous butcher knife he always seemed to get his hands on. I recently watched all 10 Halloween movies and thought it would be great to look back at one of horror’s enduring series. Turn off the lights and light the jack ‘o lantern…it’s time to get up close and personal with pure and simple evil…

The movie that started it. Mix an iconic horror villain with one of the greatest film scores of all time, a relentlessly suspenseful pace, a in ordinarily well-conceptualized heroine, a well-recognized setting, an eccentric yet brilliant English protagonist and a handful of unforgettable sequences and what do you have? A legend. This is one of my favourite movies of all time and well-deserving of its classic status. Definitely the best of the series and though many have tried to imitate, no one could ever duplicate it.

How do you follow-up a classic? Well, you decide to have the second film continue from the same night as the first! Jamie Lee comes back and while she doesn’t have as much to do, she still proves why Laurie Strode is an enduring horror icon and well-deserving of her “last girl” status (more on that later). While the movie doesn’t quite replicate the magic of the first, it also doesn’t embarrass itself, which is a feat in itself. The 2nd best of the franchise and arguably one of the best horror sequels ever produced.

It has found its audience after years of hate – if only they hadn’t called it Halloween III, it wouldn’t have taken so long to get its due. A great lead in Tom Atkins who is flawed and yet identifiable enough that we’re rooting for him. Dan O’Herlihy is just so damned creepy as the main villain and the ending is pure genius. The only stumbling block for me is calling the original Halloween a movie in this one – while I get the reference, it sort of undercuts the original by overtly stating the original never happened – a misstep in an otherwise superb entry. The third best movie in the franchise for me, even without Michael Myers.

Ah…that mask. The Michael Myers mask in this one is too clean, too smooth. I’m not a fan. Also, the ending was weird to me – we’ve already established that gunshots don’t kill Michael – so why should I believe that higher calibre bullets will do the trick? Even if there were a lot pumped into his body? These gripes notwithstanding, Danielle Harris is brilliant as Jamie, Michael’s niece. There’s some nice set pieces in the film (such as Michael’s transportation from the asylum while the iconic music is playing, or Michael duping a girl by sitting idly in a rocking chair with a shotgun, pretending to be a deputy)…and oh yeah…that ending…overall, the movie just works. It sits just below the middle for me as the 6th best entry in the franchise, it’s pretty solid, just not interesting enough to me to place over some of the other movies.

Despite most people’s opinion of this movie, I think it’s better than part 4. Making Jamie mute was a stroke of genius in my opinion, as well as having the Man in Black walk around mysteriously through the film. Is he a bounty hunter? A Satanist? Maybe a member of Watchtower? Figuring out how he will play into the mythos keeps the viewer interested enough to put up with some of the unsavory antics of the young cast. Hands-down, best scene is Michael driving Tina to the party…whoever thought that up deserved a raise in pay. Also, like part 4, a brilliant ending…this film sits squarely in the middle for me as the 5th best movie of the series.

Halloween: The Curse of Michael Myers (1995)

I watched both the Theatrical and the legendary “Producers” cut of the film and now I can confidently say…I don’t get it. What’s going on this film? What’s with the druids? What’s with the runes? What in the name of Donald Pleasance is going on? I like Paul Rudd as Tommy Doyle…and there’s some good gore in the Theatrical cut, but otherwise, there’s nothing to make me recommend this movie. From the disrespectful dispatching of one of the series’ most beloved characters to the awkward reveal of the true identity of the Man in Black, this movie is just sheer nonsense and easily the worse movie in the franchise.

I have a confession – the first time I saw this movie, I didn’t like it. Maybe it was the hype, but the movie didn’t feel like it delivered to me. Watching it years later, I liked it more. The beginning is great, having Jamie Lee Curtis back as Laurie Strode is a thrill and I even didn’t mind Josh Hartnett and whatever the hell was going on with his hair in the movie. I’m not a fan of the mask (I don’t like when I can see too much of the actor underneath) and the pacing of the film is a little uneven, but it’s not bad…I peg it as a solid 7th best in the franchise and far better than I remember it being.

First time I saw this one, I flat-out hated it. Now…yeah, it’s not the greatest, but it has three things going for it: 1) the beginning is one of the best sequences in any Halloween film. 2) Katee Sackhoff is ridiculously hot as one of Michael’s eventual victims and 3) the reality television angle isn’t really that bad and though not subtle in the least, it is at least on the mark about how real “reality” tv is. Yes, Busta Rhymes as the main good guy is a stretch (I was fine with Bianca Kajlich carrying the film) and most of the characters are just caricatures instead of actual believable human beings, but the movie isn’t as bad as everyone says – I classify it as the 8th best of the series and a movie I no longer hate.

Otherwise known as Rob Zombie’s Halloween, this movie is a mess. I don’t care about explaining Michael Myers’ origin and having the second half of the film basically play as a re-telling of the first film’s most iconic moments is redundant and unnecessary. Plus I hate all the characters with the only exceptions being Malcolm McDowell’s Sam Loomis, Sheri Moon Zombie’s portrayal of Michael’s mom and Tyler Mane as grown-up Michael…oh and of course, Danny Trejo as a caretaker in the asylum. Otherwise, I wanted every dead in the worst way possible, with Scout Taylor-Compton’s turn as Laurie Strode so far off the mark, it’s ridiculous. If not for the car wreck of part 6, this would hands-down be the worst Halloween.

This one is just… odd. I didn’t know what to make of it, but I’m now convinced it’s the fourth best of the series. Why? Well, Rob Zombie decided to actually make this movie its own thing. Not a remake or a reboot or whatever you want to call it, this movie is Zombie’s own unique vision and as such, it plays out so much better than the first one he made. Laurie is still a jerk, but at least you know why she got there. Having Loomis sell out and lose his way was a smart move. Brad Dourif is outstanding as Sheriff Brackett. This movie is unique and really stands out in the films, brutal both in the action and in the emotion felt by the characters. If Zombie had taken this approach in part 9, then his version of the tale might have had more resonance overall.