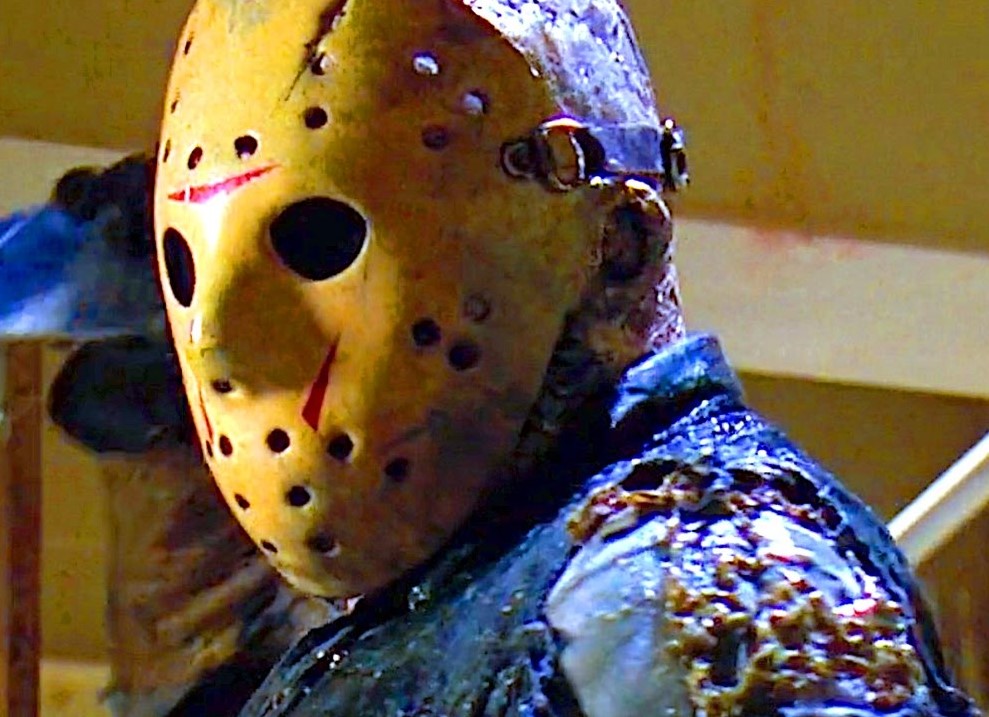 While some horror icons, such as Hannibal Lecter or Jigsaw, are more, shall we say, subtle with their terror, Jason is a blunt instrument, an unrelenting force of nature from beyond a grave. The victim of teenaged neglect, Jason’s (first) death at Camp Crystal Lake served as a reminder of how the irresponsibility of youth can produce catastrophic consequences. Returning again and again from previous demises, Jason acts as a morality tool in the writer’s hands, punishing teens for unacceptable social behaviour such as partaking in drugs, alcohol, or unmarried sex. To some, Jason would seem to be the ultimate weapon of the militant prude.

Yet, it wasn’t always this way. In the first film, Jason barely appeared, as his mother was the stalker of wayward teens, driven mad by her son’s death. Jason popped out at the end to drag the “final girl” below the surface of Crystal Lake, but it was a mere shadow to what he would become. While he returned in the sequel, the memorable third installment (that brought you the deaths in 3-D!) was where he acquired his iconic hockey mask, and the world of the gory slasher would be changed forever.

While the movie series tried to keep Jason and the series fresh, including a fake Jason (part 5, A New Beginning), a parasitic worm (part 9, Jason Goes to Hell) and even a cybernetic Jason (part 10, Jason X), Jason Voorhees is at his best when wandering around in the dark, stumbling upon teenagers and giving them their comeuppance for whatever immoral activities they happen to be engaged in at the time. While some may scoff at the larger-than-life maniac and opine that he’s about as scary as a wet handkerchief in the desert on the Fourth of July, the fact remains that Jason Voorhees is one terrifying dude. You never know when he’s going to strike, or where, who he’s going to kill, weapons he’s going to have – fear of Jason is fear of our own guilt for the baser urges and actions we commit. He is the ultimate reason to behave.

As for his misfires, like all good horror legends, he’s had a few – some would point to part 5 as a miss as it’s just a guy emulating Jason Voorhees, not the real deal (I disagree as part 5 has some genius parts, not least of which is Tommy slamming a bully through a wooden table), while others would mention part 9 (again, I disagree, Jason Goes to Hell is great fun, but I get their point). I would probably pick Jason Goes to Manhattan as the weakest of the lot, mainly because it takes the loveable killer about an hour to get to the city that never sleeps, and his death is definitely the lamest of the franchise. Other than that, all the other movies have some entertainment value, and the debates about which one does the masked murderer the most justice continues to wage on.

So, let’s hear it for Jason Voorhees, the hockey-loving, machete-wielding murderer with a bone to pick with every single person stupid enough to go to Camp Crystal Lake. While mainstream critics may raise their noses at the mere mention of the franchise, the Friday the 13th series has had a lasting appeal, and the main character has been featured on everything from lunchboxes to keychains, he’s appeared in video games, been the subject of documentaries and has even enjoyed a seat on the couch of the Simpsons. That, my friends, is the stuff of legends.