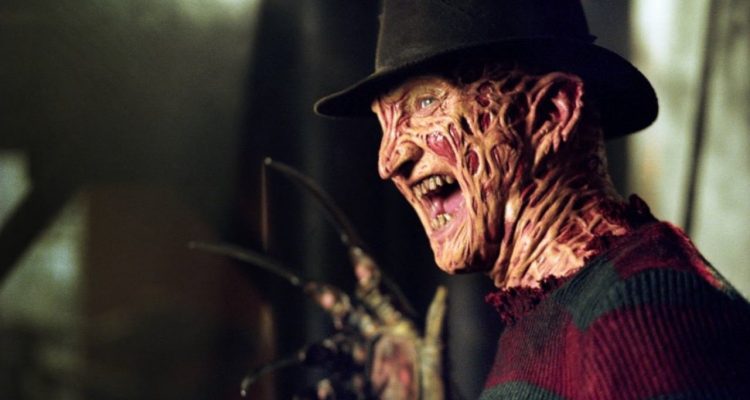 In the world of horror, much of the population is of the mute and otherworldly. You have your Creature from the Black Lagoon, your Jason Vorhees, your Michael Myers, your Xenomorphs. Occasionally, the worst monster of all, the human monster, wanders in and becomes the stuff of nightmarish legend. No villainous character exudes the human monster more than the Springwood Slasher himself, Freddy Krueger, the main antagonist of the Nightmare on Elm Street series.

Of course, calling him “human” is a bit of a stretch. Freddy is dead at the beginning of the first Nightmare on Elm Street, the victim of a vengeful mob. I guess he’s more like a malevolent entity, an evil spirit if you will. Despite his horrific appearance, I believe the aspect that is perhaps most frightening about Freddy is that he chooses to attack solely when the victim is asleep. This leads to a particularly problematic way of avoiding him – after all, we all have to sleep, unless you are an insomniac – and chances are, if you are one, you have other problems than a nut with a sweater, fedora and bladed glove chasing you around.

How many of us have experienced dreams where we weren’t in control of what takes place and what was happening to us? Probably most, if not all of us. We are all victims of the subconscious, where our worst fears can come out and play. Freddy embodies that aspect of ourselves, the rogue part that leads our helpless selves down roads in the subconscious that we don’t want to follow. That he seems to have such a damn good time while doing it just shows the level of his malevolence.

For the movies he appeared in, like most horror legends, he’s had hits and misses. The Nightmare on Elm Street series became progressively absurd as it went along, starting out as memorable and disturbing fare (who can forget the blade in the bath and Johnny Depp disappearing into the bed, only for a geyser of blood to shoot out of it a moment later?) Freddy was a serious threat, and you somehow doubted Heather Langenkamp and John Saxon would overcome him. The gleefully twisted ending underscored the main characters’ inability to defeat a monster that was already dead and preyed on them at their most vulnerable.

From there, the series pinballed to the underrated part 2, the popular part 3, and continued a progressive downhill slalom until it reached the almost unwatchable part 6. By this point, unfortunately, Freddy had become a caricature of himself and was unfortunately even a hawker of product placement, using the Nintendo Power Glove to dispatch one unlucky teen. If the series had ended there, it would have been an unfortunate end to an iconic character, as Robert Englund’s Freddy had become a pop culture icon, appearing in video games, on lunch boxes, and various other paraphernalia. Luckily, Wes Craven brought us New Nightmare, which brought a new spin on the series and brought back the nasty, evil Freddy that we all loved. Freddy’s appearance in Jason vs. Freddy was also a relief, as Freddy held his own against the hulking undead slasher and even got the final wink at the end.

The less said about the reboot, the better, as Rooney Mara looked genuinely despondent in appearing in the film (not that I blame her), and Jackie Earle Haley, as great an actor as he is, was just too short and not menacing enough to play the famed child killer. Freddy, being a human being of average size, needs to tower over his prey, using this advantage to attack the small and vulnerable and make it believable that he is a threat. When the final girl is taller than him, the effect is missing.

That being said, Freddy Krueger is, beyond a doubt, a legend. His silhouette is immediately recognizable, as is the eerie and disturbing children’s song that serves as both a warning and simultaneously makes your skin crawl. While he hasn’t always been the scariest, sometimes choosing stupid puns over serious mayhem-making, there is no one better to haunt your dreams and turn them into nightmares when Freddy is at his best.