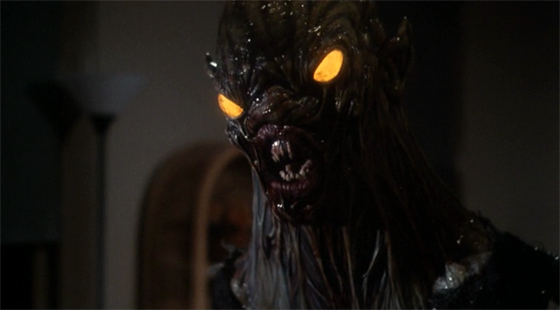 Wonderfully remastered and the film has awesome looking creatures and a cool music score.

Plot: A bizarre series of murders in New York City seems to point toward the existence of a race of mutant cannibals living under the streets.

Review: First scene of the movie: A middle class woman is walking her dog, crossing the street. As she passes a manhole, a pair of giant claws reaches out from the heavy manhole lid, and snatches the woman and her dog as she screams. The title comes up: C.H.U.D.(!) You know you’re in for it when that’s the way the movie starts! The plot focuses on a socialite photographer named George Cooper (John Heard), who has an affinity for the homeless denizens living beneath New York City. He is planning an exhibition of his time spent in the subterranean lairs of the sewer system where hundreds of people have been living. Meanwhile, an off-the-grid “Reverend” named A.J. Shepherd (Daniel Stern who would later costar with Heard again in Home Alone) runs a soup kitchen in skid row, and he calls the police to report the disappearance of dozens of his regular underground-living patrons who usually frequent his soup kitchen. The detective who responds to his call is Captain Bosch (Christopher Curry), who is in the midst of his own crisis: It was his wife who disappeared while walking their dog several nights ago. The plot lines of Captain Bosch, the reverend, and Cooper all converge when they realize that a whole slew of disappearances of people are somehow tied to a government experiment that goes by the ugly moniker “C.H.U.D.” which they come to realize may or may not stand for Cannibalistic Humanoid Underground Dweller. When the government goons who have covered up a mass nuclear waste dumb in the sewers of the Big Apple gets on to these three heroes who want to expose the truth, these three characters will have to discover just what these “CHUD” monsters are all about and brave the dark lairs of the sewers before the government undertakes a mass cover-up that might include murdering all three of them.

I’ve seen C.H.U.D. a handful of times over the years, but it’s never been as entertaining and strong as it was when I watched Arrow’s new Blu-ray of the film. It looks great for such an ugly movie, and by ugly I mean most of the film is shot in grimy, filthy sets with most of the characters covered in soot and slime. The film has a prescient undercurrent of environmental jeopardy, with cool looking (and more or less plausibly explained) creatures essentially created by corporate greed, and underdog heroes who might as well be you, your brother, your uncle, friend, or father. Douglas Cheek’s direction is sharp and crisp, and the weird synth score by Cooper Hughes is very much in tune to the synth wave music that has been making a comeback. C.H.U.D. has aged remarkably well, and by some miracle it has gotten even better with the passage of time.

Arrow’s new Blu-ray of C.H.U.D. is essential. In addition to including both a 1080p presentation of the director’s cut, it also has a high definition transfer of the shorter theatrical version. It includes a brand new isolated music track of the score, and an interview with the composer. There’s also a running audio commentary by the director, and many other features, including featurettes, interviews, trailers, and more. As a bonus, Arrow includes a newly commissioned piece of cover artwork by Dan Mumford, with reversible artwork.