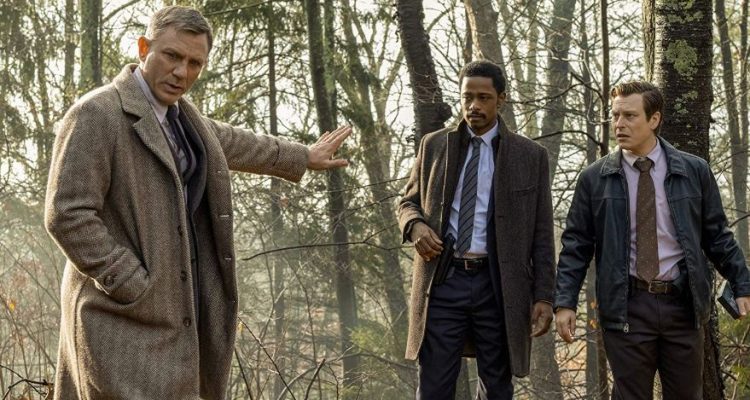 KNIVES OUT is an expertly crafted homage to the work of Agatha Christie that stands on its own as a densely-layered intriguing, yet fun, film.  Fans of murder mysteries have reason to celebrate.

Plot: A detective investigates the death of a patriarch of an eccentric, combative family.

“When people get desperate… the knives come out”

That line is uttered by private investigator Benoit Blanc (Daniel Craig, SKYFALL) in reference to his latest case – the possible murder of successful novelist Harlan Thrombey (Christopher Plummer, THE INSIDER) on the night of Thromby’s 85th birthday. I say “possible murder” because local law enforcement officers, Lt. Elliot (LaKeith Stanfield, SORRY TO BOTHER YOU) and State Trooper Wagner (regular Rian Johnson cast member Noah Seagan), are certain it’s an obvious case of suicide. The late author left behind a fortune though and a large family of sycophants who each want a piece of his empire. That fact coupled with the strange means of Thormby’s death has left Benoit Blanc suspecting foul play and everyone who was there that faithful night is a suspect. This sets the stage for the latest film from writer/director Rian Johnson, appropriately titled KNIVES OUT.

Rian Johnson is a filmmaker known for making bold choices. So, it is no surprise that the follow up film to his polarizing blockbuster STAR WARS: THE LAST JEDI would be something very different in scale and tone.  KNIVES OUT is just that. It is a return to the sensibilities of Johnson’s early films like BRICK and THE BROTHERS BLOOM. The film is driven by sharp dialogue and dense plotting that delivers thrills with plot twists and reveals instead of kinetic action.

KNIVES OUT is a clear American-style homage to classic Agatha Christie mysteries and her most famous character, the proper but good-natured detective Hercule Poirot. Craig’s Blanc is the warm southern equivalent of the Poirot character and he does an outstanding job of holding the film together, even though his Kentuckian accent is near Foghorn Leghorn-levels of absurdity. He makes the odd vocal choice work with sincerity and confidence. It’s a fun performance that left me hoping that we see more of the character in the future.

KNIVES OUT is far from a one-man show, however. Johnson has assembled one of the finest casts of the past several years to play Thromby’s family and associates- including Jamie Lee Curtis (HALLOWEEN), Don Johnson (HBO’s WATCHMEN), Michael Shannon (THE SHAPE OF WATER), Toni Collete (HEREDITARY),  Ana de Armas (BLADE RUNNER 2049), and Chris Evans (AVENGERS: ENDGAME). It’s a delight to see them either squirm or fire back under Blanc’s genteel questioning. Not all of the main cast members are as developed as I would like but it’s understandable with such a large group of characters and everyone does exceptional work with what the script gives them.

Special mention has to be made of Chris Evans’ work as Thromby’s arrogant grandson, Ransom Drysdale, though. This is Evan’s first appearance since stepping away from the role of the strait-laced Captain America in the Marvel Cinematic Universe and he is clearly having a ball playing a spoiled trust-fund kid every time he’s on screen. In a film chocked full of fun performances, Evans is the clear standout.

The wonderful acting on display is captured beautifully by Johnson’s bold directing. He has become a master at conveying information and mood with just his camera movements and KNIVES OUT greatly benefits from this. There is a staggering amount of visual information to take in at the late author’s home where the majority of the film takes place. It never feels overwhelming though, despite the large number of characters and unique setting, this is due to Johnson’s confidence and skill as a director.

Good performances and confident direction do not mean much for a mystery film if the actual mystery itself falls apart on closer inspection. Thankfully, KNIVES OUT has an intriguing central mystery that has not been spoiled by the film’s advertising and is densely layered enough that even when the audience feels like it might have the whole thing sorted, the film still surprises in unexpected ways. It also never cheats for shock value and is crafted with a clockwork precision that happily encourages the audience to put the pieces together themselves as the film goes along or to see how expertly they are placed and paid off when an inevitable second viewing occurs.

There is so much more I could talk about in the film, like how aspects of it feel like a direct middle finger to the vocal minority that continues to bash Johnson’s entry in the STAR WARS saga. The themes of unearned entitlement by people to things they had no hand in creating feels like no accident, for example. It also has interesting things to say about class division and the concept of family. I am hesitant to go too deeply into all the underlying ideas though, for fear of spoiling even one of the twists and turns of KNIVES OUT.

If you like any elements of the film I mentioned or just good mystery stories in general, then you owe it to yourself to head to the theater and see what KNIVES OUT has to offer.